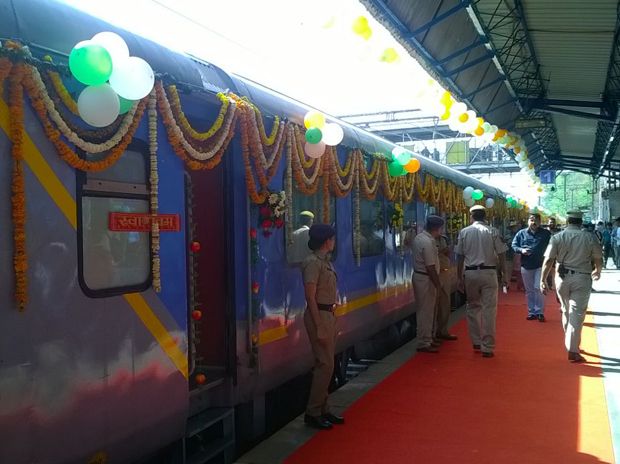 Finally ending a long wait for expectant travelers and passengers, Railway Minister Suresh Prabhu at last flagged off, India’s high-speed luxury train, Gatiman Express, on to its maiden journey. The train, which many have thought to be a precursor to anticipated bullet trains, runs from New Delhi to Agra.

The train’s inauguration is widely perceived to bring a new dawn in the era of high-speed rail travel in the country. It is said to be the fastest train in the India, reaching a maximum speed of 160 kilometer per hour, although it is still a far cry from the cherished bullet trains. However, the most outstanding aspect of this train is its deluxe facilities and features, which are said to be inspired from the exotic ‘Palace on Wheels” luxury train.

With a blazing speed of 160 kilometers per hour, the train is said to cover the 192 kilometer distance between Agra and Delhi in just 100 minutes. This significantly curtails the travel time when compared to other trains completing the same journey between the two cities.

The train will run on all days of the week, except on Friday, the day when the Taj Mahal remains closed.

The coaches of Gatiman Express are manufactured by the Rail Coach Factory in Kapurthala and are some of best in terms of technology. With best in the range coaches made by Chittranjan Locomotive Works and Linke Hofmann Busch, the train runs on WAP 5 electrical engine yielding a power of 1500 Horse Power.

Almost all the coaches and locomotives used in Gatiman Express are the same as used in Shatabdi Express, while there are many changes that have been made in the track and signaling system. A major reason behind Gatiman’s enhanced speed is that Northern Railways has consciously endeavored to remove several obstacles that exist between Delhi- Agra route. Bridges, crossings, sharp turns and yards have all been reduced. Moreover, the tracks have also been tilted in order to facilitate smoother and faster run.

Menu of the food served

The courses served on board the Gatiman Express have been attempted to be different. The catering has been made unique, heralding a new era in the luxury service. The menu lists cuisines of both Indian and Continental flavor. You can try delighting Chicken sausages with Spanish omelet or if you want to keep a tab on your calories, then you can opt for Kanjeevaram Idli, Wheat Upma or even freshly cut fruits. Indian Cuisines available on board are no less delectable. Please your taste buds with dishes such as Mini Dosa, Aloo Kulcha, Chicken roll, Swiss roll etc. And top of it all, get all these served in Bone China. Definitely, it’s quite a gastronomical delight awaiting you on Gatiman Express.

Gatiman Express has tried to set a new standard for entertainment in rail travel. In conjunction with a private provider, MyFreetv.in, each locomotive comes with an 8-inch LED Screen, fixed at the back of each seat. These screens are linked to satellite and broadcast live television. Moreover, WIFI service is included in each coach with the help of which travelers can stream videos, audios and other such entertainment on their smartphone and tabs without any personal internet connection.

Gatiman Express will run with 10 coaches in all, which comprise eight air conditioned chair cars coaches and a couple of executive class bogies. There is a total seating capacity of 715 seats. The fare for executive chair car is Rs. 1,500 while that of AC chair car seat has been decided at Rs. 750.

Born in New Delhi, India, Mayank grew up admiring, perceiving and then embracing the vastly complex, colorful and paradoxical nature of the Indian Society, which further led him to accommodate and appreciate the tremendous diversity of world. This admiration brought him to travel writing to share his thoughts and personal experiences with readers and travel enthusiasts at large to make them enjoy the wonderful beauty of the world as he sees it.