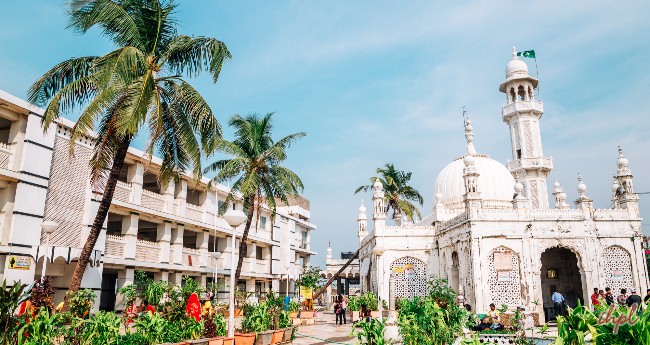 09:30 Hrs: Post breakfast Meet & greet your English Speaking guide drive towards Marine Drive  Mumbai is an island gifted with a vast and beautiful sea coast of the Arabian Sea. Earlier being the major port, now the trade activities have been centralized in one area.

10:00 Hrs: The highlights of your tour covers visit to. HAJI ALI DARGAH SHARIFF. This early 18th century shrine contains the tomb of HAZRATH HAJI ALI, a Muslim Sufi saint. There are two local legends which claim to trace the hazrath’s antecedents. One story has it that Haji Ali was a rich, local businessman who gave up materialism after a visit to Mecca and then took up meditation.

10:30 Hrs: Drive to MAMA HAJI ALI DARGAH SHARIFF. AMIR-BAHR HAJI ISLMAIL HASHUM BAHADUR, A Great Captain and Navigator Of Indian Seas who died on 20th September 1912, And was buried in this Tomb

11:45 Hrs: Drive straight to MAKHDOOM SHAH DARGAH. The dargah of Makhdoom Ali Mahimi (1372-1431), the secular Sufi saint, is popular as the Mahim dargah. Reported to be at least 350 years old, the dargah sharief has five domes, the only dargah in Mumbai to have more than one dome.

What you’ll see: A fusion of modern and traditional, and east meets west, where streets stalls contrast with brand name shops

Where to Shop: The street stalls tend to be grouped together according to the type of goods they sell. You'll come across Indian traditional clothes first, followed by shoes, then bags and belts. Further along Linking Road is the territory of the brand name stores. Therefore, it's recommended that you first take a good look around before buying anything.