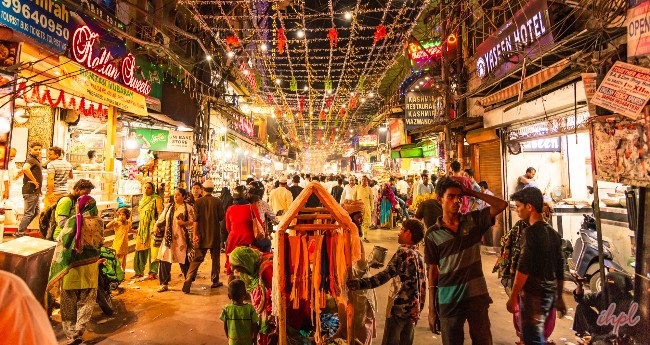 Delhi region is roughly a triangular area formed by the Aravalli hills in the west and river Yamuna running north-south in the east. Settlements in and around this region go back to the Stone Age and subsequently others existed at different points in history. Delhi, thus offers an exciting interaction between ancient, medieval and modern. Its monuments are the most evident traces of this past, spanning a period of almost a thousand years. They highlight Delhi’s historic role as a capital city. Different dynasties built their capitals here. Some altered and extended existing ones, others built new cities.

We invite you to see and experience Delhi; not only its well-known tourist destinations but also the lesser known and equally fascinating parts of the city.

FEW WALKS TO LOOK AT….

(These walks are exclusive, with the guide and customized specially for you)

Chandni Chowk is the main street of the old city of Delhi (Shahjahanabad). Chandni Chowk, literally means moonlight square and derives its name from the fact that originally, a canal ran down the centre of the street with pools at major intersections which would reflect moonlight. Today, the stream is gone and Chandni Chowk is an extremely busy road. There are shops, schools, residences, places of worship, old and new along the road.

(These walks are exclusive, with the guide and customized especially for you)

Nizamuddin is a historic village which gets its name from the Sufi saint, Hazrat Nizamuddin. His grave is one of the holiest shrines in the subcontinent. The area has some lovely monuments tucked behind modern houses, including tombs of the Mughal royal family & of the famous Urdu poet, Ghalib.