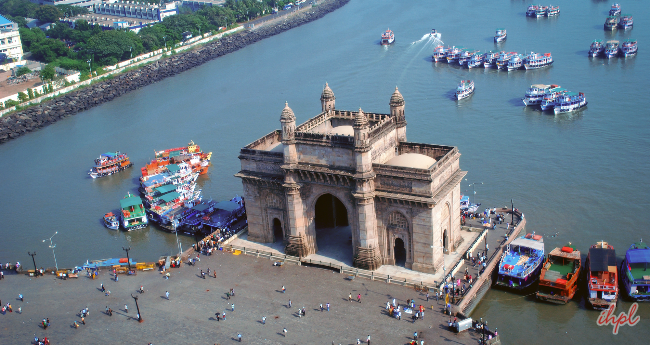 We start with the visit to the Mumbai's most famous monument - Gateway of India. This is the starting point for most tourists who want to explore the city. It was built as a triumphal arch to commemorate the visit of King George V and Queen Mary to Bombay, prior to the Darbar in Delhi in December 1911.

Then walk towards the Regal Theatre. Opened in 1933 designed by Charles Stevens with the interiors designed by Karl Schara, Regal Cinema lent its name to Regal Circle and was the only Art Deco cinema when it opened. It was the first of Bombay’s Art Deco cinemas.

Now visit Prince of Wales Museum building from outside. Designed by George Wittet, the foundation stone was laid in 1905 by the visiting Prince of Wales. The building was completed in 1914, converted to a military hospital during World War I, and finally opened in 1923 by Lady Lloyd, the wife of Sir George Lloyd, then governor. Also see, the majestic facade of the late 19th-century Elphinstone College Located opposite to the Museum.

Now walk to the Flora Fountain. This is a stone fountain situated in Fort business district in the heart of South Mumbai. Flora Fountain was built in 1864. It is now a heritage structure.

Than proceed to the Victoria Terminus Railway Station now called the Chhatrapati Shivaji Terminus which is a historic railway station and serves as the headquarters of the Central Railways.  It was put on the UNESCO World Heritage List on July 2, 2004.

Now a short taxi ride (02 Kms / 10 minutes) from V.T. Station to a local cafe with a nostalgic background, Cafe Samovar located in Jehangir Art Gallery. This Gallery displays of the most sought-after venues for artists to exhibit their oeuvres.