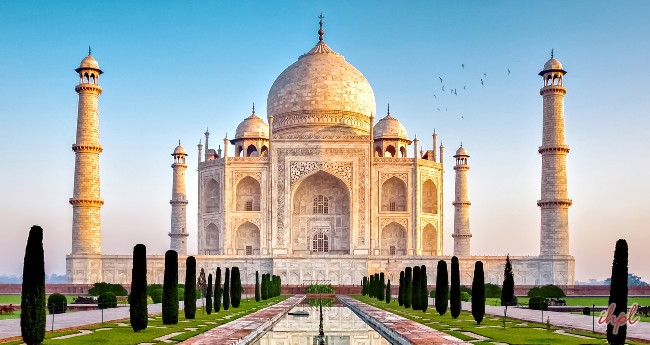 Taj Mahal was built in 22 years (1631-1653) with the orders of Shah Jahan and it was dedicated to Mumtaz Mahal (Arjumand Bano Begum), the wife of Shah Jahan. 20.000 workers labored and 32 crore rupees were spent during the construction of the monument and it was built according to Islamic architecture. It is one of the Unesco world heritage site. You will explore the entire complex of the Taj Mahal with an explanation of each building and an account of the mausoleum's urban setting, its design and construction, its symbolic meaning, and its history up to the present day

Agra Fort presents a formidable appearance with its vast walls, standing seventy feet in height, and a mile and a half in circuit, with imposing turrets and gateways. The outer wall is surrounded by a moat. The principal entrance to the Agra fort is the Delhi Gate. Crossing the drawbridge over the moat and moving over a paved, inclined pathway reaches the Hathi Pol or Elephant Gate. The gateway leading to the great courtyard of the Diwan-i-Am is reached by a steep ramp after crossing the Amar Singh Gate and the second gate.

The beauty of this inner quadrangle is its fine proportions and rich ornamentation, enhanced by the wonderful rhythmic play of light and shadow, produced by the bracket form of construction and the admirable disposition of the doors, windows, openings, and colonnades. The northern side of the quadrangle is occupied by a pillared hall.