Ugadi festival is the commemoration of the coming of the New Year. It is celebrated every year as it marks the beginning of the Hindi Lunar calendar. Moreover, it brings along happiness, aspirations, and hope. The belief is that this day and its liveliness would foreshadow the course of events for the upcoming year.

The people of Andhra Pradesh, Telangana, and Karnataka rejoice in the coming of the New Year in many different ways. On the day of the festival, people wear new clothes and an abundance of some mouth-watering traditional cuisines are cooked. The festoons of mango (Torana) are tied to the doors and the houses are decorated with fresh flowers. There is a special 'Chutney' called ‘Ugadi pachadi’ that is cooked during the Ugadi festival and is kept in an earthen pot before the idol of the house. Thereafter, puja is performed and everyone takes the share of the chutney and goes for feasts and meals together.

The Ugadi Festival will be celebrated on 2nd April 2022. It generally falls sometime during March or April every year.

Ugadi means ‘the beginning of a new period or new age’. It is derived from the Sanskrit word Yugadi, which further is a mix of two words, ‘Yuga’ meaning age/period and ‘Adi’ meaning beginning.

The Story of Ugadi

According to a legend, Lord Brahma began the creation of the Universe on this day. That is the reason he is known as the ‘creator god’ in Hinduism. Many people also believe that Brahma further created days, weeks, months, and years to keep track of time. Therefore, Ugadi day is said to be the first day of the universe’s creation.

What is the significance of the Ugadi festival?

Ugadi festival has been a traditional festival for Hindus. There are a lot of medieval documents and texts that have recorded major charitable donations to Hindu temples and societies on this day. Therefore, Ugadi day is observed as a New Year in many parts of India.

This festival not only has one but different kinds of significance, which makes it even more special.

1. Spiritual Significance of Ugadi - Because of people’s faith that Brahma created the universe on this day, Ugadi is celebrated to honor his doings. The creator of the Yugas or ages, Yugadi Krit (one of the names of Hindu God Vishnu) is worshipped as well.

2. Astronomical Significance of Ugadi - According to the lunisolar calendar, Ugadi is the day when the new astronomical cycle starts to move. That means the tilt of the earth allows the northern hemisphere to receive massive sunlight for 21 days. It is the time when the ‘blue planet’ starts recharging itself with the Sun's energy.

3. Ugadi Significance in Nature - Ugadi marks the day of Mother Nature’s regeneration. With spring approaching, new plants and leaves start to grow covering the earth with greenery. Moreover, the spring festival of Vasanta Navratri is celebrated, starting from Ugadi day and continues for nine days till Ram Navami.

4. Historical Significance of Ugadi - It is said that Lord Krishna’s Nirvana started in the early hours of Chaitra that corresponds to 18th February 3102 BC. This day also marks the beginning of the Kaliyug. Therefore, Ugadi is believed to be the onset of Kaliyuga.

The day of Ugadi is marked by enthusiasm and cheerfulness. The celebrations of Ugadi begin as people wake up early to take a ceremonial oil-bath. The idols of gods and goddesses are also bathed in oil on this day. The spirit of Ugadi is evident through beautifully decorated homes, temples, and shops with flowers and mango leaves. Rangolis are made in the front of homes to welcome positive energy.

People gather to offer prayer to the Sun God before consuming Bevu Bella or Ugadi Pachadi, a dish celebrating the six flavors of life. Temples are visited to make offerings and also to seek blessings from the Almighty and start the new year on a happy note. Further, Panchanga Sravanam is read by the priests at the temple or by the eldest family member at home.

On Ugadi day, based on the moon sign, annual forecasts for the New Year are also made by the learned pandits and astrologers. Apart from this, the special dishes made at Ugadi Festival are enjoyed by families, and sweets are exchanged with friends and neighbors.

Also known as Bevu Bella, Ugadi Pachadi is a special dish made on this day, which symbolizes the essence of life. Here the ingredients used to make this dish and what it symbolizes -

It is an important part of the Ugadi Festival as it represents all tastes of life. Besides, it teaches us that life is a mix of all emotions. Each ritual on Ugadi Festival is followed with much significance like the hanging of mango leaves and placing ‘Kalash’ near the door. Thus, Ugadi is celebrated with much vigor in different states of India as a festival of prosperity, growth, happiness, and well-being.

Q: In which states is the Ugadi festival celebrated?

Ans. Ugadi Festival is celebrated in the south Indian states of Andhra Pradesh, Telangana, and Karnataka.

Q: Why do we celebrate the Ugadi festival?

Ans: Ugadi is celebrated every year as it marks the beginning of the New Year and the Hindu Lunar calendar. It brings along happiness, aspirations, and hope, and is believed to foreshadow the course of events for the upcoming year.

Q: What does Ugadi celebrate?

Ans. Ugadi celebrates the coming of the New Year and marks prosperity, growth, happiness, and well-being.

Q: Where is Ugadi celebrated in India?

Ans. Ugadi or Yugadi is celebrated in South Indian states of Andhra Pradesh, Telangana, and Karnataka.

Q: Which God is worshipped on Ugadi?

Q: Which are the 6 tastes of Ugadi?

Ans. Yes, Gudi Padwa is also known as the Ugadi festival. It is called Gudi Padwa in Maharashtra and in Karnataka, the festival is celebrated as Yugadi.

Q: Why is Ugadi celebrated as New Year?

Ans. Ugadi marks the day of a new age or yuga. It is said that Lord Brahma created the universe on this day and therefore regarded one of the highly auspicious days of the year.

Q: What do we eat on Ugadi?

Ans. A major dish people eat on Ugadi Festival is Ugadi Pachadi or Bevu Bella, which symbolizes the six essences of life.

Q: What is Ugadi called in North India?

Q: How do people prepare for the Ugadi Festival?

Ans. The preparations for Ugadi begins days in advance. Houses are cleaned and washed for the occasion. Many delicious foods are also made and on this day. Following the spirit of the festival, people buy new clothes and purchase several items required for the auspicious day of Ugadi.

Q: Who celebrates the Ugadi festival?

Ans. Hindus celebrate this famous festival with great pomp and show. Telugu and Kannada people as well as Sindhis and Maharashtrians celebrate it with different names.

Q: What does Ugadi Pachadi signify?

Ans. Ugadi Pachadi or Bevu Bella is an important dish of Ugadi day that represents all the tastes of life - happiness, interest in life, challenges, difficulties in life, surprises and new challenges, and angry moments in one’s life.

Q: Why do we eat Ugadi Pachadi?

Ans. Ugadi Pachadi is a special food that cleanses our bodies. Eating it with neem, raw mango, and tamarind prepares our body to fight infections. Also, neem can treat many skin diseases like malaria, diabetes, viral fever, and more.

Q: How is Ugadi celebrated at home?

Ans. Ugadi celebrations at home begin by hanging mango leaves and coconuts on the front door. People clean their homes with water and cow dung paste and draw rangolis. After prayers are offered at the temple, the eldest member of the family recites Panchanga Sravanam (a Hindu almanac).

Q: Why should we see the moon on Ugadi?

Ans. We should see the moon on Ugadi because people believe that when the upper end of the moon is visible, it brings fortune to harvesting whereas the lower end is considered average for harvesting.


All events & festivals in Andhra Pradesh 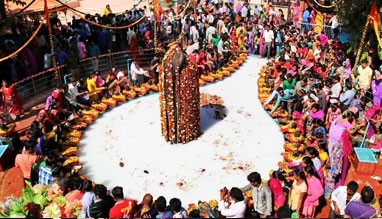 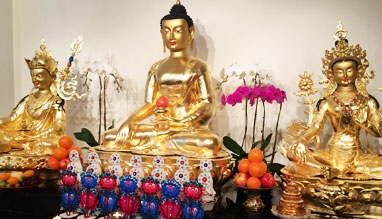 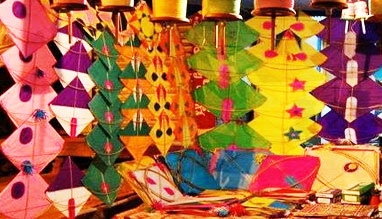