Ambubachi Mela is a Hindu fair held at Kamakhya Temple in Guwahati, Assam. It is among the most significant festivals of eastern India and the most important festival of Kamakhya Temple – one of the 52 Shakti Peeth of Goddess Shakti. This is a ritual of asceses observed with Tantric means. It is believed that the temple goddess - Devi Kamakhya goes through her annual menstruation cycle during this time. The Tantric cults worship Maa Kamakhya during the Ambubachi Mela as Kamakhya Devi is the region’s dominant Tantric tradition deity. Here, she is worshiped in a yoni-like stone instead of as an idol. A natural spring flows over the Yoni. The account below throws more light on this unique festival. You can partake in this festival with our Assam tour package, which is customizable and you can visit other tourist places also.

When is Ambubachi Mela Celebrated?

The famous Ambubachi festival of Assam, which is scheduled at Kamakhya Temple in Guwahati from 22nd June to 26th June 2022. The doors of the Kamakhya Temple will remain closed for the public till June 26, 2022.

Why is Ambubachi Mela Celebrated?

It is the celebration of the yearly menstruation of goddess Kamakhya. The Mela is an energetic affair that carries a scenic celebratory view by ascetics, making it a huge and important gathering.

The Ambubachi concept originates from agricultural, religious, and social influences. All these have collectively resulted in the emergence of the festive reason. Thus, it is taken as a symbol of religious consent. The word ‘Ambubachi’ means spoken with water. Also, it implies that the monsoon adds to Mother Earth's fertility and prepares her for procreation. Mother Earth’s ‘menses’ becomes accessible to devotees during the mela. Considered an auspicious period, during this time, women pray for fertility. On the fourth day of the fair, when the temple is open to the public, people get a cloth piece soaked in a liquid believed to be the goddess’s menstrual fluid.

Shakti surrendered herself to the flames when her father insulted Lord Shiva, as per the legends. If completed, the Lord then carried Shakti’s burning body and started tandava that could have destroyed the universe. Vishnu split Shakti’s body into 52 parts with His Sudarshan chakra to save the universe from the dejected and infuriated Lord. Each of the parts fell on different regions of India that are known as Shakti Peeth. At the place where Kamakhya Temple stands, it is believed that the womb and genitals of Shakti fell. And thus the practice, worship, rituals, and the festival.

If we look at the history of Kamakhya Temple, it was destroyed in the early 16th century. The king of Cooch Behar then rebuilt it. The temple has four chambers - Garbhgriha, Calanta, Panchratna, and Natamandiramong. The first chamber is the most important one that leads to the temple’s sanctum, which is a cave.

Being a supreme Tantrik worship centre, Kamakhya Temple has a Tantrik society, which performs the much significant Rajaewari pooja. All the rituals are secretly conducted and only initiates partake in those.

During the first three days of the fair, the entry to the temple is prohibited as the goddess is believed to be menstruating. Daily worship and any religious practice at the temple is suspended during these days. Also, agricultural tasks are forbidden such as ploughing, sowing, and transplanting of crops. Cooking food is also forbidden for widows, brahmacharis and brahmins. When the festival culminates, household items are washed and sprinkled with holy water. Worship at the temple resumes after cleaning.

This festival is celebrated with rites of Shakti. Followers of the Shakti tradition flock to this place and perform ascetic modes of devotion such as tantra, jugglery, even practicing extremity with some body parts. The mela looks much like Kumbha Mela as in both, ascetics perform similar severe forms of extreme ascetic practices. Some of the activities are remaining buried in the mud, carrying heavy weights with delicate body parts, and continuously standing for days and months.

On the fourth day of the festival, Maa Kamakhya is believed to have completed her menstrual cycle. At this time, the temple priests carry out the Garbhagriha ritual bathing. Thereafter, the temple is open for devotees to seek blessings of the goddess.

How to Reach Kamakhya Temple

Kamakhya Temple can be easily reached by air, road, and train.

By Road: Regular Assam Tourism Department buses ply between the temple and the railway station. You can reach the temple in 20-25 minutes, depending on the traffic. 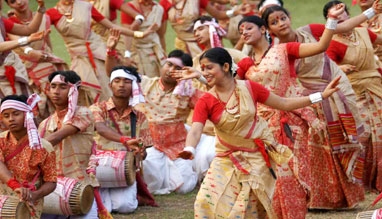 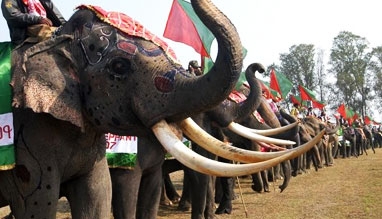