A traditional aboriginal ethnic festival celebrated in Assam, Bohag Bihu is also known as Rongali Bihu and it marks the beginning of the Assamese New Year. The Bihu Festival is one of the most popular festivals in Assam, a north-eastern state in India. It is celebrated each year with loads of fun and abundance. Of the three Bihu Festivals held in Assam, namely Bohag Bihu or Rongali Bihu, Kati Bihu or Kongali Bihu, and Magh Bihu or Bhogali Bihu, the Rongali Bihu Festival is celebrated in spring. The Assamese people, irrespective of caste, creed, faith, religion, and belief, participate in the Bihu Festival. You can also attend this festival with our Assam tour packages, which are customizable and you can modify it according to your requirements. Contact us for more information and to book a tour with us!

Originated from the Sanskrit word meaning “Vishu”, Bihu has been celebrated by the Assamese people for quite a long time. Since Assam has predominant agricultural seasons, the Bihu festival marks the cycle of farming for the state. It is also a celebration of the change of season.

The idea behind celebrating this festival is to express joy. Many say the dance performed during Bohag Bihu provides the platform for young boys and girls to express their love. Therefore most of the Bihu songs of the earlier period had the overtones of a love song.

There is no confirmed history behind the Rongali Bihu festival. However, the popular belief amongst the community is that 'Bihu is as old as the river Brahmaputra'. After considering the early songs and intricacies of the Bihu dance forms, one can presume that it came to this valley when people started tilling the earth for sustenance. The Bihu dance is the main part of the festival, which makes the festival more joyful.

In the earlier times, the songs are of love, desire, and sadness themes. Bonoriya geet traces its origin to a time when cultivation was the only source of occupation for the people of Assam. Over time, the composition of the songs and dance forms have changed remarkably.

Where is Bohag Bihu Celebrated?

It is celebrated by all Assamese people irrespective of religion, caste, or creed. This traditional festival is celebrated in Assam with great zeal and vigor.

How to Celebrated Bohag Bihu?

Considered the ‘Festival of Merriment’, the Bohag Bihu is the spring festival of Assam and it coincides with the Punjabi festival of Baisakhi. It is the harvesting or sowing festival. The first day of the Assam Rongali Bihu Festival is called the Garu Bihu, when bulls and cows are bathed with turmeric, fed with gourds and brinjals, and provided with new attaching ropes. The second day of the Rongali Bihu festival is called the Manush Bihu when men, women, and children put on new clothes. The third day of the festival is Gosai (Gods) Bihu when the statues of gods that are worshiped in all households are cleaned and worshiped.

When to Celebrate Bohag Bihu?

The Rongali Bihu or Bohag Bihu Festival in Assam begins in the middle of the month of April, which is the last day of the month of Chaitra according to the Hindu calendar. In 2021, the festival will be celebrated from 14th April.

This festival is also observed in Bengal, Manipur, Nepal, Orissa, Kerala, and Tamil Nadu. Although, the festival is known by a different name in every region such as Pongal in South India and Baisakhi in North India.

Special dishes like pitha (rice cake) and larus (traditional food made of rice and coconut) are prepared at every home for feasts, and the destitute receive contributions from the well-off people. Traditional drinks like Chuje, Nam-Lao by Tai-Ahom, Aapong by Mising tribe, and Jolpan are also prepared and shared among family and friends.

During the Assam Rongali Bihu Festival, people visit their friends and relatives with food items and gifts. Close relatives and friends are also gifted with hand-woven scarves. Apart from the feasts and other features, the festival's main attraction is the Bihu Dancing, during which visitors are served with rice-beer.

The Bohag Bihu or Rongali Bihu festival continues for seven days and is called Haat Bihu.

Tips you must know to attend Bohag Bihu 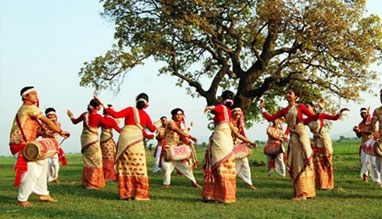 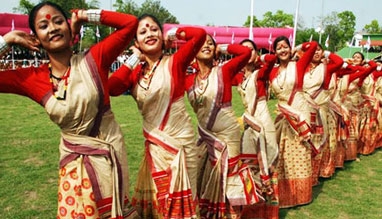