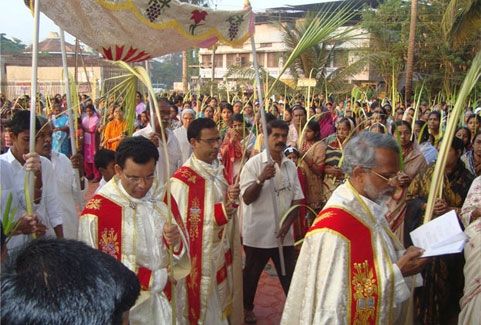 The Easter Festival is observed with great celebrations in the State of Kerala in the southern part of India. The Festival of Easter in Kerala is the oldest Christian Festival and is celebrated with the same keenness and seriousness as in any other part of the world. The Easter Festival is held with Easter Sunday and the celebrations of the Easter memorialize the central tent of Christianity, the resurgence of Jesus Christ.

The Easter Festival in Kerala is divided into four distinctive time periods. This begins with Lent, which comprises of 40 days of fasting and preparation for the resurrection of the Christ. Then comes the second phase, which is the Holy Week and it includes the Thursday, Friday, Saturday and Sunday.

The third period is the Octave of Easter, during which, a large number of children are baptized. The fourth phase or the last period is the Easter, which extends over 40 more days. During the Kerala Easter Festival, the ceremony of Lord Jesus Christ's supper and the traditional washing of feet are carried out to stress the love for one another on the Holy Thursday. The rite of the paschal bread is carried out in most of the Christian households. When the dinner is over, the 'cross cake' is brought out and cut into pieces and then distributed among all the family members.

During the Festival of Easter in Kerala, the next day is Good Friday, which is a day of sorrow and the churches remain empty. All the services are held in the afternoon and in most of the churches a pungent drink is served, which is made out of leaves and vinegar, along with other food items.

The next day is the Holy Saturday, a day of bereavement. For the whole day no services are held in any of the churches. But later on, at 10 o'clock in the night, the churches get jam-packed to observe the Easter Vigil. In the darkness, a new fire is lit and sanctified. At that point of time a candle is vowed and from it many more candles are lit, which suggests the resurrection. There is music in the air and the church bells are rung. The churches and the surrounding areas are illuminated. The next day is the Holy Sunday, which is observed quietly and it ends with a sumptuous dinner at homes and with relatives.

Time of Celebration of Easter Festival

The Easter Festival in Kerala, the oldest Christian festival, is celebrated at sometime between 22nd March and 25th April, every year. This year, it is scheduled to be held on March.