Ladakh in Jammu and Kashmir is flocked by tourists every year, not only because of its picturesque location but also because of the colorful culture and interesting locals. This region is also well famed for the ancient monasteries, the most famous of which is the Monastery of Alchi, which is now a World Heritage Site. It is around the time of the festivals and fairs in Ladakh that people visit it the most. The popular of these festivals are the colorful monastic festivals of the Buddhists. Matho Nagrang or the festival of the oracles is one such monastic festival in Ladakh, Jammu and Kashmir.

It is held in the Matho Monastery and is indeed a colorful festival of the monasteries. On the first two days of the celebrations for the Matho Nagrang, the monks give a splendid performance of mask dances. They wear colorful and vibrant silk brocaded robes and masks that reflect the faces of many Gods and Goddesses. The popularity and fame of the festival of Matho Nagrang lies in the fact that after two whole months of dedicated mediation in absolute isolation, two oracles appear. They come to the courtyard of the monastery and accompany the masked monk dancers. These oracles also predict the future events. There are people who com from near and far to seek some advice from the oracles and perform certain rituals to handle disasters and other unpleasant happenings. These oracles come in complete spiritual trance after their isolated meditation. They run and jump from a balcony to the other and involve in quite a few acrobatics, all with their eyes blindfolded. All these spectacles can be witnessed during the Matho Nagrang.

The Matho Nagrang is celebrated on the 15th day of the first month of the Tibetan calendar. This festival in Ladakh is held at the Matho Monastery which is the only monastery belonging to the Sakya School of Tibetan Buddhism. 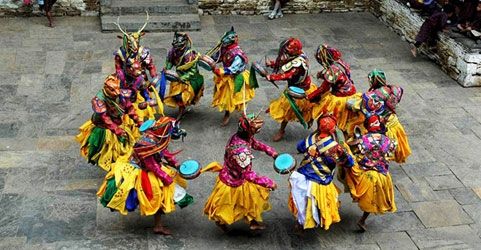