Certain Sunni Muslims also believe that fitr actually comes from fitrat meaning 'nature' and Eid-ul-Fitr is therefore the celebration of god's magnanimity in providing nature to man. Celebrated on the first day of the new moon in Shawwal month, Eid al-Fitr marks the end of Ramadan.

Eid al-Fitr is one of the most important fairs and festivals in India. However, the Eid-ul-Fitr Celebration In Madhya Pradesh is mostly characterized by coterie celebrations. The festival is largely celebrated among friends and family. In the morning of Eid all-Fitr, people bathe and dress up in new clothes and have sweets before walking to the mosque for Id prayers.

Men wear white clothes (kurts and pajama mostly) because white according to Islamic traditions, symbolizes purity and austerity. On this day, according to the Quran, Allah has intended a dole for every Muslim who is free and is in possession of alms worthy capital. These alms are distributed among the poor on by the more prosperous Muslims.

Do Rakat Namaz, or the Id-special prayers are performed in the morning at the mosque. Charitable gift, called Sadaqah Fitr, is given to a needy person as thanksgiving. The amount to be gifted must ideally be in excess of one's essential needs and free from all encumbrances of debt. Alms usually consist of food grains or their value in money.

According to the Quran a person should give 3.5 lb of wheat or its flour per head, or 7lb of barley per head or their cost. Do Rakat Namaz is performed; these prayers can be read anytime between sunrise and just afternoon. Even women in burkhas attend the prayers in special chambers ordained for women at the mosques.

The 30-day fast is broken on Eid-ul-Fitr with sumptuous feasts, before which men embrace each other three times, as is laid down in the Quran. The festival originated when after proclaiming Ramadan as the period of fasting and austerity, Prophet Muhammad the pioneer of Islam, announced a day for celebrations to reaffirm the feeling of Eid-ul-Fitr brotherhood. Eid is characterized by the exchange of gifts and sweets. 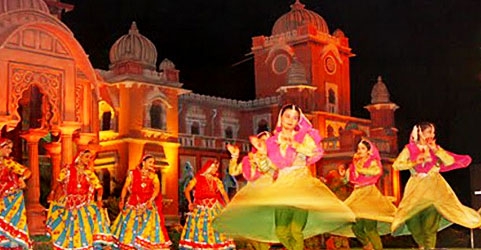 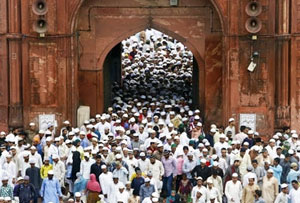 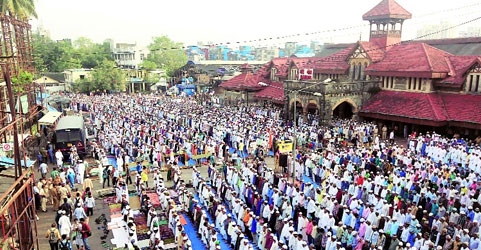