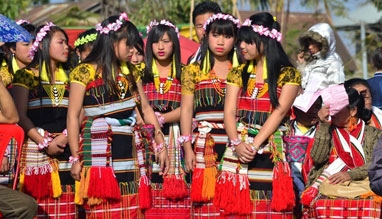 Manipur, in the northeast part of India, is the home to a complex web of tribal groups which comprises of as many as 29 different major tribes. The different groups of Nagas in Manipur celebrate their culture and customs through different festivals. These festivals give the participating people a chance to be aware of the customs and religions of the diverse cultured sects of Manipur. The Gang-Ngai Festival in Manipur is a significant festival of the Kabui Nagas. All year through, the Kabui Nagas, a particular tribal group of Manipur, wait for this opportunity to rejoice their lifestyle, their culture and express their religion. They do it through the Gang-Ngai Festival, with music, dance, feast and five days of full extravaganza.

The festival of gang-Ngai starts with the omen taking ceremony. During the fist day of this five day festival, the Kabui Nagas honor their ancestors through sacred rituals. The first day is followed by four days of incessant celebrations. There are community feasts, various programs of music and dance performances that keep the audience mesmerized for a long time. It is through this festival of Gang-Ngai in Manipur that the Kabui Nagas get a chance to conserve and safeguard their religion. The streets full of men and women dancing in their colorful traditional attires, to the tunes of melodious ethic instruments, surrounded by enthusiastic audiences, presents a pretty sight in Manipur. There is also an exchange of gifts between friends and family during the Gang-Ngai Festival in Manipur.

The Gang-Ngai Festival in Manipur is celebrated in the month of Wakching which generally falls on the months of December of January. The celebrations continue for five days.