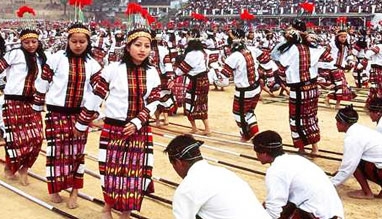 Manipur is a land of festivities, fun and frolic which goes on throughout the year. Manipur is always bustling with the cycle of numerous festivals. The festivals of Manipur project their cultural, social and religious aspirations. These festivals are perfect for removing the monotony of life and help the people lead a fuller and better life. The Hindus residing in Manipur celebrate New Year Day in the second week of April.

The Kut Festival is an Autumn festival of the different tribes of Kuki-Chin-Mizo groups of people in Manipur. The festival has been variously described at different places amongst different tribes as Chavang-Kut or Khodou. It is a happy occasion for the villagers whose stock of food is plentiful after a year of tremendous hard labour. The Kut Festival is a thanks giving festival which includes songs and dances along with marry making. The festival is observed every year in the honor of the giver of an abundant harvest. Similar to the Kut Festival, a harvest season festival is observed every year in the state of Punjab. This festival is known as Baisakhi celebrated on the first day of Baisakh every year. This time of the year the whole harvest is gathered and the farmer jubilates in the accomplishment of his hard work throughout the year. The fair and festival of Baisakhi is an expression of prosperity and hence is enjoyed along with singing and dancing.

Time of Celebration of Kut Festival:

The Kut Festival is celebrated in Manipur every year on the 1st of November.