Also called the Phousnyi festival, the Sekrenyi Festival in Nagaland is celebrated by the Angami Tribe. This is essentially a ritualistic festival that takes place with a series of colorful and varied ceremonies. The Sekrenyi Festival continues for 10 long days.

The Sekrenyi Festival starts with the “kizie’ ritual and on the first day the men go for a bath to the village well. Two young tribals then clean the well at night and it is guarded to prevent anyone from using it after it is cleaned. The early mornings again, the men take a bath ceremoniously . The Thekra Hie is the best part of the festival when the young men and women of the tribe sit together, singing traditional tribal songs. There are jugs of rice beer as well as plates of meat kept in front of the participants. The men go for hunting on the seventh day of the Sekrenyi Festival. The most significant part of the festival is on the eight day when there is bridge pulling or gate pulling and there are inter village visits. It is only when the festival ends that people resume their work on the fields.

[Explore this 7 days Angami Nagas Tour to plan your holiday]

The Sekrenyi Festival is celebrated sometime in February every year and lasts for 10 days. It generally falls in the 25th day of the month of ‘Kezei’ by the calendar of the Angamis, the tribe who celebrate this festival in Nagaland.

All events & festivals in Nagaland 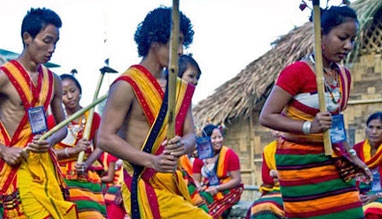 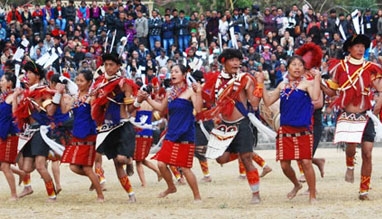