In the light of the fair day the Punjabis rejoice one of the opulently hued festival also known as Baisakhi Festival, and along with that they also enjoy the Baisakhi Mela. The event is in agreement with the 10th Guru of the Sikhs also known as Guru Gobind Singh. He actually envisaged the path of truth or Order of the pure ones known as the Paanth Khalsa, on this date.

Moreover the golden Ravi Crop is harvested at this time of the year so it is a very blissful time for the farmers who celebrate the Baisakhi Festival with much zeal and fervor. A grand fiesta is held during that time, and is known as the Baisakhi Mela. People wear new clothes and have a chance to eat free of cost from the road side Langars. The Punjabis let their hair fall loose and dip in the cheerful arcade.

Description of the Baisakhi National Fair:

With near and dear ones the Punjabi man enters the scenario of absolute happiness; a paradise of the ground can be no less joyous than this fiesta. In the Baisakhi Mela we can come across the wrestling sessions, races, singing and aerobatics. There are also performances such as the Vanjli and Algoza.

There are abundant stalls that are replete with bangles of various kinds. There are toys or the Children, local handicrafts ad other utensils for the daily usage. At the Baisakhi Fair the Guru Gobind Sahib stayed for almost 9 months for the completion of the sacred book of the Sikhs also known as the Guru Granth Sahib.

The prominent feature of this festival is that the Baisakhi Sahib is not held in the villages of Punjab alone it is also held in the other parts of the country and metropolitan cities; but the colorful impact of the Baisakhi Fair reaches the abroad and is celebrated with equal zeal and enthusiasm over there too, like New York, Jersey and Toronto. These festivals are also accompanied by dancing and amusement. The dances are Bhangra and Gidda.

Time of Celebration of the Baisakhi Festival:

The Baisakhi Festival is usually held during the months of April and May. It has been observed that the hymn of the rich golden harvest mingles with the cheerful cry of the people and produces an echo of self expression at this Festival.

Other Places to Visit in Punjab 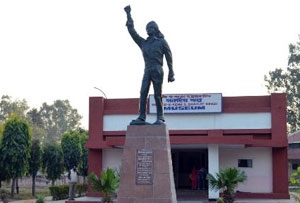 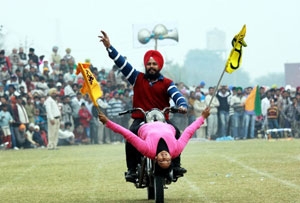