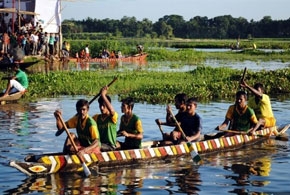 Boat Race is an important event in Tripura and is held every year during the month of August at Melaghara or Gandhacherra. It is one of the famous festivals which hold attraction not only for the people of Tripura but also for the rest of the world. It is a unique ceremony when the people with boats dive down the river and a competition is held; prizes were given at the end of the Boat Race.

Tripura is a land consisting of both the tribal and the non tribal groups and the Hindus forms a majority of the population of Tripura. So, it is evident that the Fairs and Festivals of Tripura would involve the Hindus and those festivals would have maximum participation from the Indus only.

But the best feature of this Boat Festival is that people irrespective of caste, class and creed are equally given the opportunity to participate in the event and this makes the carnival all the more appealing and amazing. Tripura is a land with lush green landscape inundated with frequent gorges and rivers. But down these rivers people let flow their boats and participate in the Boat Race amidst cheering audience and heartfelt hope and aspiration.