Durga Puja in Kolkata is the largest festival of the year for Bengali Hindus. The festival is a religious occasion to worship Maa Shakti, Durga. It celebrates the victory of Ma Durga over the evil demon Mahishasura. The festival is a grand occasion where ornamented, life-sized idols of Durga are depicted slaying Mahishasura. In large open spaces, elaborate pandals, made of bamboo and cloth, are created to house the idols. The worshipping goes for five days after which in brilliant procession to a local river, the idol is immersed so that they make way to their celestial abode.

The 10 days of Durga Puja in Kolkata is a time for socializing with family and friends. People dress up in new clothing, visit the decorated pandals, participate in the festivities, and feed of mouthwatering delicacies.

According to mythology, Lord Rama was the first to have worshipped the 'Mahishasura Mardini'. Maa Durga was the slayer of the buffalo-demon, and by offering 108 blue lotuses and lighting 108 lamps, at this time of the year, the Lord invoked the blessing of Shakti.

The first grand worship of Goddess Durga in recorded history is said to have been celebrated in the late 1500s. Folklores say the landlords or zamindar of Dinajpur and Malda initiated the first Durga Puja in Bengal. The origin of the community puja followed soon after. Individual communities collect contributions from local residents to conduct the Durga Puja Festivities.

Durga Puja in Kolkata has its own unique festivities. The festival is celebrated for 10 days, starting from Mahalaya, the days of Sashthi, Saptami, Ashtami, Navami and Bijoya Dashami has its own set of rituals. Grand idols of Durga portraying the slaying of Demon Mahishasura are created. Accompanying the Goddess, are Goddess Lakshmi and Sarswati and Maa Durga’s sons Ganesh and Kartika.

On the occasion of Mahalaya, the first of the 10 days the Goddess is invited on earth. It is the day of an auspicious ritual called Chokku Daan. It is believed the Goddess descends to earth at the time of drawing the eyes on the idols. Kumartuli or the potter’s locality is a famous place in North Kolkata where majority of the idols are made.

After the sixth day, the beautifully decorated idols are brought into brilliantly decorated pandals. Decorated with flowers, fine clothes, jewellery, red vermillion, the Goddess is offered various sweets, flowers and other offerings. The chant of hymns, special rituals, the beat of Dhak (drum), incense and devotional songs create the perfect setting. There are also a lot of cultural activities that takes place as part of the celebrations. People come together to dance, sing, perform plays and other cultural entertainment.

The tenth day of the Durga Puja is called Dashami. It is believed that on this day, Goddess Durga gained victory over the Demon Mahishasura. The end of evil and the restoration of balance on the earth is known as Vijayadashami.

The last day of Durga Puja witness crowds of enthusiastic devotees gathered to bid the Goddess adieu till the next year. Married woman apply red vermillion powder on the Goddess and then to each other as a sign of fertility. In a grand procession the Goddess is carried to the Ghats to be immersed in water.

Kolkata is connected by National highway number 2 and 6. It has a broad network of government and private run buses which connect to the other cities of West Bengal.

All events & festivals in West Bengal 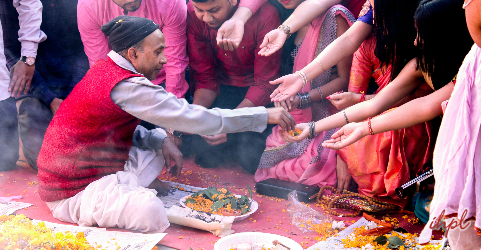 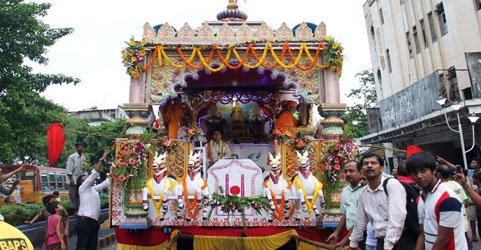