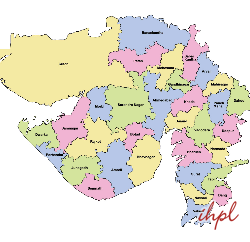 From beautiful marble temples to the golden sea beach on the shores of the Arabian Sea, the cities in Gujarat are equally unique and beautiful. The kaleidoscopic fabric of Gujarat is not only about temples and seashores but deserts, forests and colorful festivals too. From the colors of Gujarat's tribal life to the exquisite handicrafts, the cities in Gujarat bring out each little dimension that adds beauty to Gujarat in India.

On the western part of India, Gujarat is a unique city which was earlier called Gujaratta or the land of Gujjars. These Gujjars were an ancient tribe who passed through Punjab and settled in different parts of Western India which later formed into Gujarat. After that Gujarat was invaded by a number of foreign rulers like the Portuguese and British. Archaeological excavations state that Lothal was one of the most ancient cities in Gujarat which has still preserved the remnants of the Harappan civilization. On your Tour to Gujarat in India you can plan a trip to the different cities in Gujarat and enjoy the different Tourist attractions of Gujarat.

Gujarat was a part of Mumbai during the British period. It was in the 1960s that the Gujarati population wanted a separate state of their own and that gave birth to two new states, Gujarat and Maharashtra.

Different cities in Gujarat have different and unique importance attached to it. From the land of Lord Krishna to Gandhiji, the tales of sacrifice, love and struggle make Gujarat one of the most beautiful cities in India. From the coast of Dandi where Gandhiji accomplished his Satyagraha to the serene and exquisite Somnath Temple on the coast of Saurashtra to the rich varied wildlife in Gir forests, the cities in Gujarat are simply beautiful and unique.

The largest coastline in the country is in Gujarat which has a number of beautiful golden beaches and it is one of the ideal destinations for the tourists from all over the world. Amongst the cities in Gujarat you can get a glimpse of the ancient city of Lothal, the beach cities of Daman and Diu and the diamond capital of Surat. Besides this there are a number of other interesting tourist attractions which you can see during your Gujarat Tours.

Besides this you can get to see the colorful fairs and festivals in Gujarat which takes place in different cities in Gujarat. From exquisite handicrafts to the folk art and music, Gujarat allures tourists from all over for its rich cultural heritage.

List of Top Tourist Places to visit in Gujarat