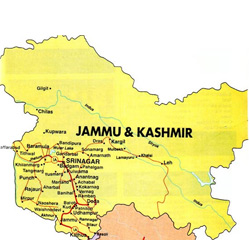 The most ravishingly beautiful hill station in India, Jammu and Kashmir, is the most sought after tourist destination in India. The flower beds and snow capped peaks that the 60s and 70s Bollywood heroes and heroines are seen singing and dancing around, mostly belong to Kashmir. Tourist attractions in Kashmir are spread all over the cities in Jammu and Kashmir and are a must see.

Cities in Jammu and Kashmir

Srinagar- the lake city and the summer capital to the state of Jammu and Kashmir, Srinagar is home to the famous Dal Lake. The shikaras and houseboats that float on the waters of the lake are particularly popular. The Char Chinar on an island in the lake and the beautiful Shalimar Gardens are worth their fame.

Jammu- the winter capital of Jammu and Kashmir and famous for the important Hindu pilgrimage Vaishno Devi Temple, Jammu is located at the foot of the vale of Kashmir. The willow vegetation that populate the slopes of the Jammu and Kashmir see the large scale manufacture of cricket bats which are mostly available for the cheapest price in Jammu. The dry fruits market and handicrafts industry is also booming.

Ladakh-Leh- the little Tibet in India is what best surmises the character of Ladakh. Bound by the Karakoram Range on the north and the Himalayas on the south, Ladakh is a Buddhist settlement. The largest town in Ladakh is Leh. Ladakh is famous for its remote monasteries and its barren mountains which make it a blazing cold desert, the only one on the map of India.

Pahalgam, Gulmarg, Sonamarg, Zanskar, Katra are other cities in Jammu and Kashmir that contribute significantly to the tourism industry of the state.