Jeypore is the commercial centre of the Koraput district and has all the facilities to be a convenient base for Excursions from Jeypore, Orissa to visit some well known places of interest around.

Excursions from Jeypore, Orissa is a worthy experience because you can visit Bagra which is a charming waterfall on the river Kolab and is an ideal picnic spot. You can also go out for the Shiva Temple which has some rare Champak trees and a serene atmosphere.

Excursions from Jeypore, Orissa is a nonstarter without a visit to Nandapur which has the 'Batris Simhasan'- a throne that has 32 steps. Sunabeda is also one of the important places to visit on Excursions from Jeypore in Orissa, as it is a marvelous example of Orissa's spectacular landscape. Sunabeda is situated amidst a lush green valley and has an Aero-Engine Factory that speaks volumes about the modernization process in the region.

The next best destination to be in while on Excursions from Jeypore in Orissa is Rayagada. The important tourist attractions in Rayagada comprise of Maa Majhighariani Temple where only the face of Maa Majhigharani is worshipped. This temple is well known for Chaitra-Parba. Hatipathar is a place of scenic beauty and there are two waterfalls which contribute to the aura of the region. You must also make it a point to visit the Laxminarayan Temple, the Shiva Lingams in Paikapada, the waterfalls in Chatikona and Minajhola which is a natural beauty spot and Shivaratri is a popular festival here. The Devagiri Hill with it's rectangular plain is a tourist's delight and has 476 steps.You can also make a trip to Padmapur which has the shrine of Manikeshwari Shiva. Excursions from Jeypore India must also include a trip to Behrampur which is one of the important commercial centres and widely known for its variety of silk. Easily accessible by any means of transport it is one of the best places to have a leisure trip. It also serves as a gateway to other tourist spots like seaside resort of Gopalpur and Aryapalli. Mahendragiri Hill which rises to an altitude of 5,000 feets above sea level and covered by evergreen forests and the Tarantarini Temple are other areas which you need to check out while on Jeypore Excursion. 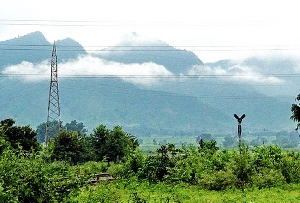