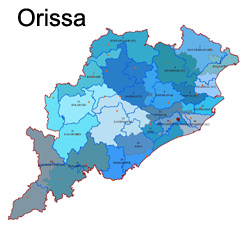 Located along the coast of Bay of Bengal, Orissa is characterized by its lush green landscape along fertile plains. Known for its rich culture and tradition, Orissa has all that it takes to pass muster as one of the popular travel destinations. There are a number of cities in Orissa that deserve a special visit. Each of the cities enjoys its own distinctive identity and individuality in terms of the spell it casts on the visitors. Indianholiday.com provides you with a ready reckoner as far as the cities in Orissa are concerned.

Bhubaneswar, also referred to as the "Cathedral City" is a bustling nerve center of the state. Counted as one of the major Orissa cities, Bhubaneswar has wonderfully blended its enigmatic past with modern developments.

This ancient city is a lesson in temple architecture. Bhubaneswar is home to over 600 odd temples. If you wish to trace the development of Hindu religious architecture, there is no better place than Bhubaneswar to do this.

Cuttack is also counted as one of the important cities in Orissa. Located at a distance of about 29 kms from Bhubaneswar, Cuttack is known for the tourist attractions that it is dotted with. The Stone Revetment of Cuttack is one of the finest architectural marvels. Besides this, the Barabati fort, Qadal-I-Rasool and Paramhansnath Temple are also the major highlights of the place. Cuttack has also earned a place of import in the hearts of the avid shoppers who find the place ideal to invest in the handcrafted items and silk and cotton fabrics.

Puri has carved a niche for itself as one of the major travel destinations in Orissa. Located on the shoreline of the Bay of Bengal, Puri is a sacred place for the Hindus who consider it to be the abode of Lord Jagannatha. Endowed with golden sand beaches, Puri lures those who are in lover with the sand and the sea. The majestic Jagannatha Temple dating back to the 12th century is one of the most popular landmarks in Puri.