Sanchi is the renowned Buddhist pilgrimage destination in Madhya Pradesh, India. Tourists in huge number flock to this city to visit exquisite stupas, monasteries, temples and pillars that date back to 3rd century B.C. to the 12th century A.D. Of the various specimens of art and architectures, Sanchi Stupa 1 is a very popular monument. It was erected by the Ashoka, the prominent Maurayan emperor. Travelers who venture on a tour to Sanchi like to take excursions from Sanchi to nearby places once they have seen all of Sanchi.

Sanchi excursions means traveling around fascinating sightseeing spots like Vidisha, Udaygiri caves, Besnagar, Udaypur and Gyaraspur. Besnagar is around 3 km from Sanchi and it comes after Betwa River. The most visited site of this place is The Heliodorus Pillar. It is a monolithic free standing pillar and resembles Asokan pillars. The difference between this pillar and other Asokan pillars is that it is smaller in size.

On a travel around Sanchi you will also come across Udaypur and Gyaraspur. Udaypur is located around 60 km away from Udaygari. Here the most fascinating site to visit is the massive Neelkantheswara temple. It is an exclusive paradigm of 11th century Paramara architectural patterns. The quintessentially attractive features of this temple are its symmetrical designs, rich carvings and elaborate Shikhar (spires).

On excursions from Sanchi do not miss on calling in Gyaraspur which is around 40 km North East of Sanchi. It is a popular site to relish the beauty of ruins. Some of the noted tourist attractions of this place are temples of which Athkhambha or Eight Pillars and Chaukhamba or four pillars that belong to the 9th and 10th centuries A.D. are very important. You must also take in the 10th century Mahadev temple here. It is situated on the hill above the village. It is counted amongst the striking remains with the wrecks of stupa.

Two of the most important places that you must consider on your Sanchi excursions are discussed at length in the links below. Please, browse through the links and furnish yourself with important inputs on them. 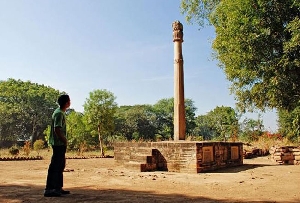