Rani Sipri was one of the Hindu queens of the king of Ahmedabad. The Rani Sipri's Mosque was commissioned by Rani Sipri of Ahmedabad and speaks volumes of the inter-religious marriage trend that became quite popular among the Indian royalty, to facilitate political alliance. The mosque is believed to have been built in 1514 AD by Rani Sipri, wife of Mehmud Begada who executed their son for a misdemeanor. The Mughal sultanate had under its rule a number of smaller local sultanates ruled by Muslim rulers.

These regional Sultanates had to rely more actively on Hindu political and military allies, and were also more liberal in adopting Indian practices, or making concessions to native traditions. The Muslim nobility in Gujarat treated Hindu noble families with relative equality and respect, and Muslim princesses were often married into the families of Hindu allies, just as Hindu princesses entered into the Muslim royal households. This was however, in sharp contrast to the practice of the Mughals who though they sought Rajput princesses as brides, did not permit their own daughters to be wed into Rajput families. Mughals accepted the Rajputs wives only as inferior partners (with the exception of Akbar who was known for his secularism), whereas the regional Sultanates were more likely to treat their Hindu allies as equals.

This attitude is reflected in both Ahmedabad and Champaner in an array of outstanding monuments that in some respect outshine Mughal monuments even. Remarkable for their ornate three-dimensional decoration derived from Hindu and Jain architecture, these monuments seamlessly incorporate into their scheme, motifs considered traditionally auspicious by the Hindus - such as the Jain 'lamp of knowledge' and the 'kalpalata' (wish-fulfillment creeper) and the 'kalpavriksha' symbolizing fecundity and prosperity.

And Rani Sipri's Mosque Ahmedabad and Rani Rupmati's Mosque are two of the most aesthetically enriched monuments in Ahmedabad that showcases the fusion of Hindu and Muslim styles, fabulously.

The mosque is a small one with a height of 50ft and length of 54ft. This mosque is also known as the Masjid-e-Nagira or Jewel of a Mosque because of its intricately carved decoration. Jali or filigree screens with motifs of flowing plant and tree forms are commonly to be seen. The mosque is adorned with an array of columns intricately carved, long running corridor and domed roof. A separate area of worship, for the women called, 'Jenana' is located upstairs. 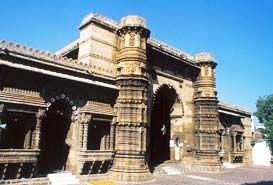 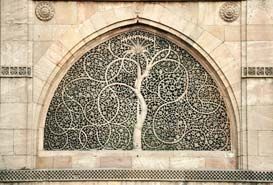 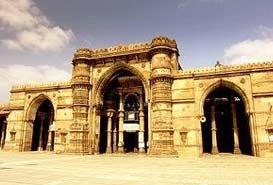 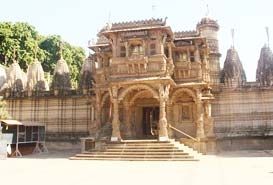 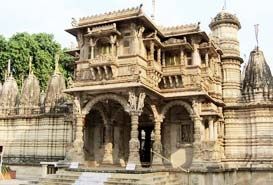