Adhai-Din Ka-Jhonpra, Ajmer as the name suggests was constructed in two and half days. It is a relic of an old mosque. On a quadrangle base, the ancient mosque has a front screen wall with pointed arches. Its beautifully carved pillars, arched screen and ruined minarets make it one of the masterpieces of ancient architecture.

In the 12th century this monument prior to being a mosque was a flourishing Sanskrit college, a great seat of learning. Legend has it that a Muslim king, Mohammad Ghori, destroyed it to construct a mosque in its place. As it was a hurried construction, many remains of nearby temples were used for building the monument. It is said that at least 30 pillars must have been used from other temples to build the elegant piece of architecture.

The arched walls of the mosque have inscriptions with Islamic calligraphy, however most of them are in ruins. Kufi and Jughra inscriptions from the Holy Koran have been extensively used on the archways. Adhai-Din Ka-Jhonpra is supported by 124 pillars all uniquely carved portraying Hindu and Jain architecture, while the monument is crowned with 10 splendorous domes.

This ancient piece of architecture would take you down the lanes of history steeped in mystic charm of the old royal days of the Muslim period. It is an important part of sight seeing in Ajmer. 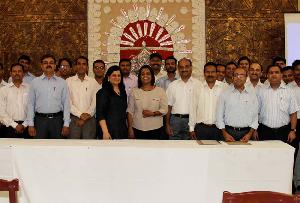