The stories of haunted forts in India is nothing new, we have grown up listening to them. However, the fort which is associated with such haunted tales is Bhangarh Fort. Located at the border of the Sariska Tiger Reserve in the Alwar district of Rajasthan, this 17th-century fort is infamously known as the “most haunted place in India”. Visitors attest to ghostly sightings and unnatural experiences within its compounds, and the stories of its being haunted are so widespread and believed that villages have sprung up quite far from the fort itself. The ASI, or the Archeological Survey of India, has, on its part, forbidden the locals, as well as the visitors, from visiting the fort at night.

Here is details about Bhangarh Fort in Alwar

Legends behind the Bhangarh Fort

There are several legends surrounding the eeriness of the Bhangarh Fort.  According to one fable, a king named Madho Singh built the fort after obtaining permission from an ascetic who laid down the condition that the shadow of the fort must never fall on his house. However, one of the successors of Madho Singh increased the size of the fort vertically, thereby enveloping the ascetic’s house in its shadow. As a consequence, the fort soon met its destruction and was abandoned in no time.

According to the second legend, a local black magician was supposedly bewitched by the beauty of Princess Ratnavati of Bhangarh. To possess her, he cast a spell over a certain cosmetic she was supposed to use. However, the princess soon discovered his plan, and poured the entire cosmetic upon a massive stone boulder. This boulder then crushed the princess to death. However, before breathing his last, he cursed the entire place, saying that not a soul would ever reside there in peace. The entire surroundings around the Bhangarh Fort have been haunted ever since, or so it’s believed.

Bhangarh Fort is situated at the edge of a vast green expanse between Alwar and Jaipur, with close proximity to Delhi, too. The fort bears a close resemblance to the medieval city of Shahjahanabad. It consists of four massive gates in every direction.

The premises of the fort consist of a miniature waterfall, along with temples, which lend an air of tranquility to the entire surroundings. Remnants of once existing palaces can also be found inside the fort. They are indicative of the fort’s prosperity during its glorious days. Clearly, the fort’s popularity doesn’t need to rest on the haunted stories surrounding it, it is an architectural marvel in itself. 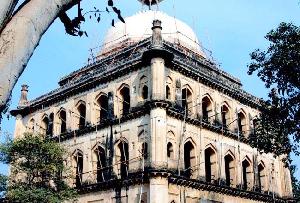