Rajasthan occupies a significant spot in the global tourist map. The unique appeal of the place and the amalgamation of a number of attractions make it such a popular tourist destination. The tourist attractions range from places with natural beauty to places with historical significance. Hence, it manages to attract a large number of tourists that comprises of tourists of varied tastes. Rajasthan is dotted with a large number of tourists. These places offer a great experience to the tourists as the monuments are a testimonial to the rich history of the place. The various features of the monuments help in giving a clear idea about Rajasthani architecture along with its historical background. There are also some places which have a high density of these famous monuments. Alwar is one such place that has no dearth of attraction for history lovers. Tomb of Fateh Jang is one such monument in Alwar that is embedded with both historical significance as well as architectural excellence. Being the official court of Shah Jahan, it is a must visit during tours in Alwar.

Attractions of Tomb of Fateh Jang

The history of the Tomb of Fateh Jang dates back to the time of Shah Jahan. It was the official court of the great emperor. The tomb was dedicated to him because of his noble deeds. Moreover, Shah Jahan had further association with Alwar as by birth, he had a relation to the blue blooded Khanzada rulers of Alwar. Hence, this tomb also has a great historical significance. This historical significance of this tomb is a major draw for tourists.

The architecture of the Tomb of Fateh Jang is also a great attraction for the tourists. This tomb boasts a blend of Mughal and Indo Islamic architecture in India. Sha Jahan himself was a great patronizer of Mughal architecture. During his reign, a number of monuments and forts were built in Rajasthan and Delhi. This is also one of them and hence had the features of the unique architectural styles. Some of the features of the tomb that will surely attract your attention are high minarets, round domes, quality sandstone. If you get awestruck by the beautiful exterior then the interior features will further mesmerize you. The miniature designs and the various other features of the tomb are a treat to the eye.

There are a number of tour operators that offer tour to Alwar. Keeping in mind the significance of Tomb of Fateh Jang, most of the tours offered includes a visit to the tomb. Though there are many tours available but it is always suggested to opt for tours operator which has a high level of experience and expertise in this sector. Opting for such a tour operator will definitely ensure a comfortable visit to Alwar. 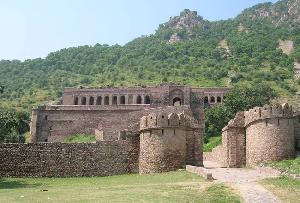