Chhattisgarh, a newer state in the map of India, is one of the rare tourist attractions in the world which forms a part of everyone's itinerary for its historical as well as scenic significance. An area that has, from the very beginning, been primarily the place of the tribals, Bastar boasts of a different array of tourist attractions in its structures and landscapes. The Monuments in Bastar are some of the major points of interest here.

Making your way through thick forests of sal, teak and seesam, along the bamboos and thickets, the rippling rivulets and tall mountains, cascading waterfalls and sprawling valleys, you will enjoy every bit of your Tour to Bastar. Apart from these enchanting landscapes, the Monuments in Bastar are also worth visiting. Among these, the Bastar Palace is of prime interest. Built around a time when the Bastar dynasty shifted their capital from Bursur to Jagdalpur, it houses several specimens of quality art and architecture from the bygone times. The sparkling white structure has been witness to the chivalry and heroism of the then rulers and kings.

Kutumsar Caves and Kailash Gufa are other Monuments in Bastar which are sure to get you magnetized to their charm. Both located in the Kanger Valley National Park, near the Tiratgarh waterfalls, are located at 38 km and 40 km from Jagdalpur respectively. The former, 1370 meters long cave houses beautiful formations of stalactites and stalagmites in them and are probably darkest of their kinds, 35 meters below the underground level. The latter is situated on a small hill and looks similar to its counterpart. The echoes produced here are amazingly melodious.

Your trip to Bastar should definitely then, include the above destinations as part of the sightseeing trips. 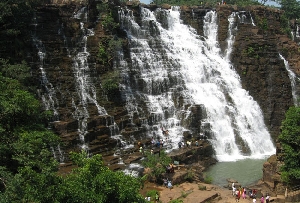