Traveling is always part education and part entertainment. Each episode of one's tour bears a significance with it that delivers a world of good in some way or the other to the person concerned. However, India, with the profusion of her natural treasures has been a major tourist attraction to many people around the world. Chhattisgarh, an Indian state which recently came into being, has a trove of tourist attractions to be explored and appreciated. Kutumsar Caves and Kailash Gufa, Bastar, are some of the interesting tourism options while you are on your Tour to Bastar.

Bastar being a place primarily influenced by tribals for decades now is a key tourist spot in the state of Chhattisgarh. The lovely streams, the meandering mountains, the green valleys and bushes and thickets of bamboos, sal, teak and bija trees create an aura of excellent charm. Apart from these captivating landscapes, the Monuments in Bastar are some of the special sightseeing sites. The Kutumsar Caves and Kailash Gufa, Bastar are of prime interest shrouded by a peculiar sense of mystery.

Kutumsar Caves and Kailash Gufa:- Bastar are sure to mesmerize you with their charm. Both situated in the Kanger Valley National Park, stand at 38 km and 40 km from Jagdalpur respectively. The Kutumsar Caves which are 1327 meters long display magnificent formations of stalactites and stalagmites and are probably the darkest of their sort, 35 meters below the ground level. These are possibly the world's second largest caves formed naturally and house five natural chambers and quite a few blind wells.

The Kailash Gufa is situated on a small hillock and looks similar to the Kutumsar Caves. A 100 meters long cave, it is also pitch dark and has a narrow entrance. Discovered in 1993, the cave houses stalactites and stalagmites galore. There is a special stalagmite formation which can be seen at the end of the cave in the shape of a Shivlinga. The reverberations caused here are strangely musical.

With torch lights and a guide along with you on your expedition, experience all the thrill of exploring these amazing caves. 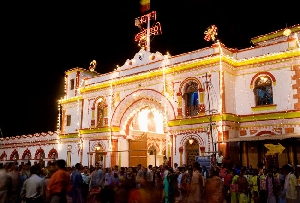