The central figure of The Swaminarayan Temple at Bhuj in Gujarat in India is the idol of Lord Swaminarayan. The idol is beautifully clad with colorful clothes which add vibrancy and life to the simple idol. Devotees flock in large numbers everyday to get a darshan of the Lord.

The Swaminarayan Temple is a major Tourist Attractions in Bhuj in Gujarat. The Swaminarayan Temple at Bhuj is a beautifully built temple and the beauty of the temple is also a factor that attracts people from far and wide. The intricate designs and the stone carvings stand as a proof of the rich architectural brilliance that was practiced in India in the past.

Swaminarayan Temple in Bhuj in Gujarat in India is also involved in providing a great help to the society in its own way. The temple has been actively involved in organizing relief camps in areas which is affected by natural calamities. All other activities carried on by the Swaminarayan Temple at Bhuj are also of great help to the humanity. The temple organizes camps where people are taught ways to quit smoking, drinking, drugs and also getting out of any anti-social activities. The temple also organizes camps where bone marrow donation and blood donation are done. The temple takes great efforts in spreading education and spirituality. The adults are encouraged to read scriptures and motivate themselves through spiritual introspection and discourses.

The Swaminarayan Temple in Bhuj was destroyed during the major earthquake that had hit the place, but soon plans to reconstruct the temple was made and works are in full progress to rebuild the temple. Bhuj in Gujarat in India is known as a city which holds the essence of tradition and religion in India in its own way. The Swaminarayan Temple, Bhuj is a matter of pride as it pulls in a number of tourists from all over the world throughout the year.

Bhuj is easily accessible from any parts of India and Gujarat. As Bhuj is an important city and is well connected to every part of Gujarat and India by trains and buses. Tourists planning to take a flight to Bhuj can also reach Bhuj easily. 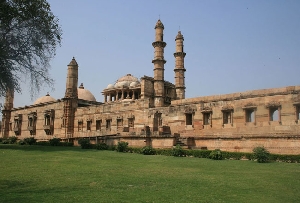