Constructed in 7th century C.E., Kapaleeswarar Temple is not only known for its sanctity, but also for its brilliant architecture. The holy shrine is devoted to Lord Shiva and the Lord here is worshipped as Arulmigu Kapaleeswarara and his companion Devi Parvati as Arulmigu Karpagambal. The presiding deity is in the form of lingam.

Legends say that Shakti prayed to Lord Shiva in the form of a peacock (peacock is called Mayil in Tamil); and hence the surrounding area of the temple is named as Mylai (Mayilāi). The Temple is located by the sea, which is a major plus. Every year devotees and other travelers from all across the globe pay a visit to this shrine and attain great peace of mind. Moreover, the Poompaavai Patikam composed by young Saiva poet-saint of Tamil Nadu, Sambandar, is associated to this shrine.

Arulmigu Kapaleeswarar Temple is one among the highly-pious shrines and important tourist sites in Chennai. The temple boasts of Dravidian styles and showcases striking gopurams. There are two entrances, one at the front and one at the back of the gopuram.  The gopuram on west faces the holy tank and is smaller than the gopuram on east which is 40 meter high.

The current structure of the temple is constructed according to the descriptions provided in Puranas and Tevaram. Devoted to different gods, the temple comprises of several Sannidhis devoted to various Hindu Gods.

Celebrated with great enthusiasm is the Theppam festival, which is celebrated near the temple tank. The Karpakambal shrine here holds regular Tirumurai concerts attracting a lot of visitors and devotees. It is also believed that Subramanyar got Velayudham (Spear) by his mother, here in Singaravelar shrine.

Kapaleeswarar temple is easily accessible by major modes of transportation- rail, road and air. Chennai International Airport is the nearest airport and Chennai Central Railway Station is the nearest railway station. There are sufficient numbers of bus services available from the main city of Chennai to Mylapore. 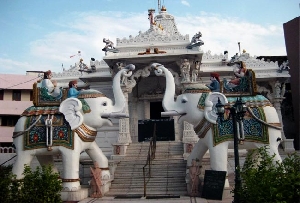 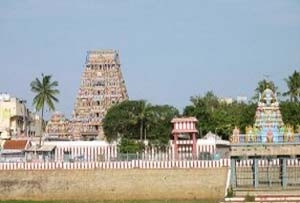 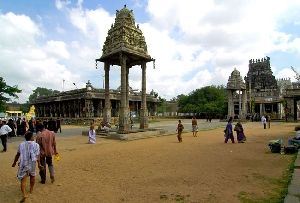