Holy places everywhere are meant for purifying the consciousness of the tourist. A place is made predominantly holy by the presence of the Lord and His loyal devotees. Holy places in Diu will purify your soul and will ensure a spiritual healing from your sorrows and grief.

To offer your prayers and to attain spirituality you can visit the holy places in Diu. Major attractions of Diu are the famous holy places which feature great architectural grandeurs. The churches dates back to ancient times and are true exemplary of beautiful architecture.

Diu a former Portuguese enclave, and now a Union Territory, is steeped in history. Diu was under the control of Chanda and Vaghela dynasties till the 14th Century. The Muslim rulers ruled over the island town till 1380 AD. After that it was under the rule of the powerful wave of invasion of the foreign rule that lasted well up to 450 years. It is quite natural that the holy places in Diu reflect characteristic feature of the history. Diu holy places mostly cover up the impressive churches and cathedrals which were built during Portuguese invasion.

One of the famous holy places in Diu is the St. Paul’s church which is dedicated to our Lady of Immaculate Conception. The erection of the church was started in 1601 and was finished in the year 1610. The chief facade of the church is perhaps the most intricate of all Portuguese churches in India. The façade has been illuminated by flood lights. The church adorned with curiously treated spirals and shell - like motifs and the superb wood carving is considered to be the most gorgeous of all the Portuguese churches in India.

If you want to visit the famous holy places in Diu it is worth visiting the Church of St Francis of Assisi. It was the friary of the Franciscans and was constructed in 1593. The Church is still in use and the cloister has been rehabilitated into a hospital.

Diu holy places draw tourists from across the world. The old St. Thomas Church has been transformed into a museum which houses antique statues, various stone inscriptions of the earlier rulers, wooden carvings and idols. 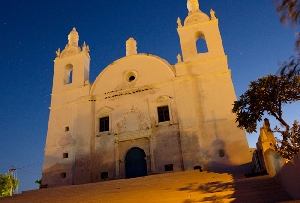