Dwarka offers an entryway to India's western parts. This place has got its name from the word 'dwar' which denotes door. Amongst the Holy Places in Dwarka, an admired place that draws tourists in huge numbers is the Nageshwar Mandir, Dwarka. This temple is devoted to Lord Shiva and remains abuzz with tourists and pilgrims round the year.

Nageshwar Mandir, Dwarka, India has quite a few interesting legends attached to it. According to Shiv Purana, Supriya, an ardent Shiva devotee, was once attacked by a demon Daaruka while he was in a boat. The demon put him in prison along with several others at Daarukaavana, his capital, where he stayed with his wife Daaruki. Supriya told all prisoners to narrate the mantra 'Aum Namaha Shivaya'. When Daaruka learnt about this, he ran to kill Supriya. However, at that instant, Lord Shiva appeared as a Jyotirlingam and vanquished Daaruki with the Paasupata Astram.

Nageshwar Mandir in Dwarka, the Nageshwar Mahadev Sivalingam faces south while the Gomugam faces east. There is a popular story for this position. One day, Naamdev, an ardent devotee of Lord Shiva, was singing bhajans facing the Lord. Other devotees told him to stand aside and not block the front view of the Lord. To this, Naamdev asked these people to propose one direction in which the Lord is not present, so that he can stand there. The angry devotees carried him out of the temple and left him on the south side. To their surprise, they found that the Sivalingam was now facing the south direction with the Gomugam facing east.

Nageshwar Mandir, Dwarka, India is about an hour's drive from the city of Dwarka. It houses one of the 12 Jyotirlingas in an underground compartment. It has a giant statue of Lord Shiva and a new temple. The complete temple complex was sponsored by late Gulshan Kumar, the T series music baron. At Nageshwar Mandir in Dwarka, you can get the chance of a close darshan of the Shivling. However, you need to wear a Dhoti, which the temple would offer you if requested.

Shivaratri is celebrated with great fervor at this temple. Many devotees come from far away places on that day to experience the festive air and seek divine blessings. 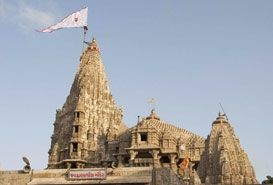 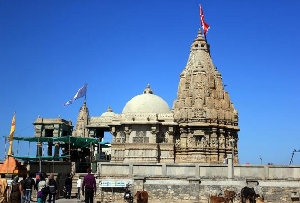