Mahalaxmi is the Goddess of power and strength and is believed to be an incarnation of 'Adishakti'-the supreme form of power and energy. The Shaktas- worshippers of Shakti cult, among the Saraswats, worshipped Adishakti in the form of the linga. Many accept Mahalaxmi as Pallavi, their supporting deity, who is believed to have been released when the gods and demons were churning the ocean for amrita the nectar of immortality. The Saraswats, at the time of their arrival in Goa, were worshippers of 'Shiva-Shakti'- Shiva being represented by the 'Linga', and Shakti as the Goddess. Thus Shri Mahalaxmi was their Goddess and has been worshipped by the Shilahara rulers (750-1030 A.D.) and also the Kadamba Kings of Goa. This peaceful or Satvika form of devi that shows in the idol at this temple has a unique feature- that she wears linga on her head.

In addition to the black granite stone idol that we can see now, there was also an Utsava idol made of 'panchloha' (five metals). It is said that during the Portugese inquisition in 1557, two non-Brahmins, Sapta and Phato, carried the Utsava idol in a box, to save it from the rage of the Portuguese who already had then destroyed the granite idol. Sapta and Phato traveled by boat along the Arabian Sea, crossed the Rasai River and reached Talawal or Durbat in Atrunja, and handed over the Utsava idol to the Bhandiwade Mahalaxmi Temple. As a reward, Sapta and Phato were given two balls of rice after the midday mahapuja under the instruction from the goddess to the temple management. This practice is still carried out at a small hut constructed (near the temple) in memory of these two devotees.

Shri Mahalaxmi Temple is 4 kms from Ponda in the village Bandora. You can avail buses and taxis from Panjim to reach the temple.

Air- Goa airport is at Bandolim.

Road- connected to Maharashtra and Karnataka by road. 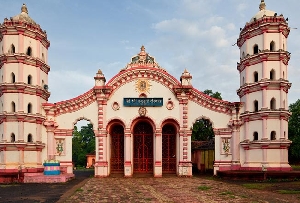