Shri Nagesh at Bandora Temple is dedicated to Lord Shiva, the destroyer among the Holy Trinity in Hindu mythology. The Shri Nagesh temple at Bandora has a gallery on both sides with intricate woodcarvings depicting the events from the great epic Ramayana on one side and wooden images of Astadikpal and Gandharva on the other. At the entrance a huge idol of Nandi the bull in black granite greets you.

In ancient days this deity was known as Nagnath, according to a copper plate, bearing the year 1222 Saka (1300 A.D.). It undoubtedly proves the temple's antiquity since there is an inscription in the compound of the Devastan supporting this. This temple was constructed in 1780 AD and the annual jatra of the temple is held in the month of Chaitra (March-April) during Ramanavami. Shivaratri is also celebrated with Rathotsava on Magha Amavasya (next day). The temple has Agrashalas or guesthouses with well-equipped rooms and halls for wedding purposes and for the lodging of the pilgrims. The Talai or the water tank at the temple is famous in Goa for its crystal clear water throughout the year.

The Shri Nagesh Temple is situated in Bandora village, about 4 km to the east of Ponda and is situated on Pharmagudi-Kavalem-Ponda road at about 800 meters from Pharmagudi, a point 26.2 kilometers away from Panaji on Panaji-Belgaum National highway. Buses and taxis are available on hire.

Panjim is 29 km from Bandolim, the place where the Goa airport is located. You can also reach Goa by train on a Konkan Railway train from Mumbai. Road transport from Maharashtra and Karnataka are also available in plenty. 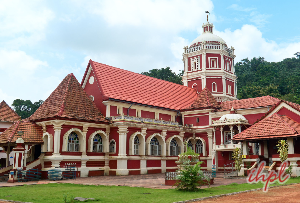