The Gorakhnath Temple in Gorakhpur is named after the Guru Gorakhnath who learned his lessons in austerities from Matsyendranath, the founder of Nath Sampradaya (monastic group). Together with his disciple Gorakhnath, Guru Matsyendranath founded the school of Hatha Yoga, one of the schools most well known and practiced schools of Yoga.

The Gorakhnath Temple in Gorakhpur is considered to be the most important center for Nath yogis. The temple is representative of the yoga sadhna, austerities and enlightenment of Guru Gorakhnath. It is belived that the Samadhi shrine and gaddi of Gorakhnathji is located inside this famous and popular temple in Gorakhpur. The temple has significant following in eastern Uttar Pradesh, terai region and Nepal.

One of the popular legend associated with this temple and Guru Gorakhnath is that devotees chanting Gorakhnath chalisa 12 times are blessed with the divya jyoti or the miraculous flame.

In the records of the temple it is revealed that the Gorakhpur Gorakhnath Temple structure and shape was transformed over the period of time. In fact many attempts were made to destroy this temple during the rule of the Sultanate and Mughal era. First it was the Alaudin Khilji who destroyed the Gorakhnath temple in 14th century and later it was destroyed by yet another devout Islamic ruler of India Aurangzeb in 18th century.

Notwithstanding the fact that the structure was destroyed twice, the place still holds its sanctity, its significance and its pious aura.  The form and shape in which this temple is seen today is said to have been conceptualized by late Mahant Digvijaynath and the current Mahant Avedyanathji in the second half of 19th century.

The Gorakhnath Temple in Gorakhpur is standing on the 52 acres of the land. It is exactly positioned in the heart of the city on Gorakhpur-Sonauli state highway. This temple is a good example of peeth of the Nath sect along with Indian sculpture. The most attractive feature of this temple is the garbh griha where white marble statue of sage Gorakhnath is portrayed as a manifestation of Lord Shiva in deep meditation posture.

His very sacred charan paduka has been placed close to his mediation site. Prayers are held everyday in the morning and evening. The Gorakhnath Temple in Gorakhpur is almost every day visited by the devotees. But on every Tuesday and Saturday the number of the visitors increases to great extent.

Places of interest and things to do in Gorakhnath Temple

The Gorakhnath Temple is dedicated toward conservation and protection of cows which are considered holy and often referred to as gau mata (mother cow). Many species of cows are reared in gaushala which include Harayanwi, sahiwal, gangatiri, giri and red sindhi and other pedigree.

In the garbha griha (inner sanctum)of the Gorakhnath Temple, there burns a flame which is called akhand jyoti (eternal flame). It is believed that the flame is burning continuously since treat yuga, which is the second of the four ages of mankind. The flame is symbolic of integrity, spirituality and oneness.

In the temple precinct lies yet another significant temple belonging to Bhima. Mahabali Bhimasena was the elder brother of Dharamraj Yudhisthira the eldest of Pandavas in Ramayana. As per the legend when Bhimasena arrived in the temple to invite Guru Gorakhanath to attend the Rajsuya yagna, he was in Samadhi (a stage of intense concentration which is the final stage at which union with divine is achieved). To extend the invite, Bhimsena had to wait for quite a while. Since Bhimsena was a heavyweight, it is said that a portion of earth sank below. To commemorate the occasion a pond was built here which is named Bhimasarovar.

There is a pond called Bhimsarovar also located in the east of the temple. The pond contains holy water of all the pilgrimages in India. It is belived that this pond also found mention in the stories of the Bhims of Mahabharata fame. Nowadays, this pond has been turned into a boating site by the authorities of the temple.

One of the very popular and pious places which are thronged by the devotees is Durga Mandir located in the rear of the Gorakhnath Temple.

The festival of Makar Sakranti is celebrated with great gusto at Gorakhnath Temple every year. As per the legends, it is said that once performing austerities Guru Gorakhnath reached Jwala Devi Temple. There Jwala Devi advised him to stay and offered him prashada but since the offering was not vegetarian shreenathji could not accept it.

Instead he told Jwala Devi to fire the hearth and boil some water and in the meantime he went out to beg for some grain to prepare khichhdi (porridge). The legend states that devi does as asked and that flame is still burning today at Jwalaji Temple but Gorakhnathji didn’t return.

Instead he wandered and reached Gorakhnath where currently the temple stands. He sat down here and started meditating. It is said that devotees prepared him a hermitage and started filling it with porridge.  It was the day of Makar Sakranti. The hermitage never got full and to commemorate that occasion Makar Sakranti (Khichhdi Parv) is celebrated every year by devotees with zeal and dedication.

The Khichdi Parv is observed every year on 14th of January which is also the day when Makar Sakranti is observed in India. 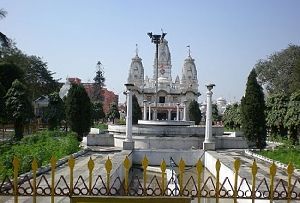 Things To Do in Gorakhpur