Gurudwaras are venues of Sikh worship. Even if you are not an ardent follower of Sikhism your visit to Paonta Sahib would be a delightful experience. Paonta Sahib in Himachal Pradesh was founded by Guru Govind Singh, at the age of sixteen years. River Yamuna flowing nearby is supposed to wash out the sins of mankind through its ever flowing waves.

The Sal forest surrounding the Gurudwara seems to enhance its natural beauty. Guru Govind Singh was invited by the erstwhile king of the Rajputs to help him fight the mighty Mughal forces. For four long years he stayed there, the waters of Yamuna River consecrated his established Gurudwara, Paonta Sahib. The literal connotation of the Paonta Sahib is space for foot hold.

Paonta Sahib is a very important place for the pilgrimage of the Sikhs. It is the place where their last Guru stayed for four years. It is also the sacrosanct venue where their sacred text known as Guru Granth Sahib was written. 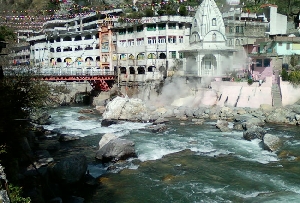