Himachal Pradesh is home to natural wonders, including glacier lakes, glistening rivers, high-altitude mountain passes, and breathtaking landscapes. Among them, the placid lakes of Himachal Pradesh are among the popular tourist attractions. These lakes are nestled in the laps of the mighty Himalayas that are among the strikingly beautiful and unspoiled regions of the state. The mountainsides of the state are honeycombed with caves and studded with lakes. And as if to emphasize the tremendous natural contrasts that are the hallmark of Himachal Pradesh, along with the freezing water of the alpine lakes, there are numerous hot springs where a large number of tourists visit to enjoy their vacations. Some of these lakes date back to millions of years when the earth was still young and geographical forces of nature rampant. Some of these lakes are held sacred and still, while others are looked upon with a captivating gaze for their sheer majesty and coloration. The lakes in Himachal Pradesh fascinate the tourists by their colors, proportion, and geographical locations.

Many of the lakes in Himachal Pradesh are situated at high altitudes and embedded in rugged and steep mountain terrain. These expanses of water are usually small and are icebound in winter. The charm of these sparkling lakes is beyond description and they are among the most popular tourist attractions in Himachal Pradesh that are flocked by innumerable travelers.

Fringed by the lofty mountains of Chandra Bhaga ranges on all sides, Chandratal Lake is one of the most beautiful lakes in Himachal Pradesh. Nestled at an elevation of 4,300 m above sea level, this high-altitude lake has a crescent-shaped basin owing to which it got its name 'Chandratal' means 'Moon Lake'. It remains accessible in the summer months only from June to September and afterward, the route gets blocked due to heavy snowfall. This shimmering lake is a paradise for nature lovers and adventure enthusiasts. Tourists can reach there by road and trekking, starting from Batal. This shimmering lake changes its shade with the color of the sky.

Built-in 1976, Gobind Sagar Lake is a manmade reservoir that the Bhakra Dam forms. Named after Guru Gobind Singh Ji, the tenth Sikh Guru. This reservoir is built on the River Satluj, and the huge Hydel dam at Bhakra is one of the world's highest gravity dams. The Gobind Sagar is 90 km long and nestled amidst the Himalayan range. The lush greenery of the mountains adds charm to the beauty of the lake. This is the biggest lake in Himachal Pradesh and is home to numerous species of birds and animals, including Chausingha, Sambar, Hyena, Chinkara, Nilgai, and wild boar. There are a plethora of adventure activities to indulge in here are river rafting, canoeing, kayaking, surfing, and swimming.

Popularly known as Tso Pema or Lotus Lake, Rewalsar Lake is nestled at an altitude of 1,360 m above sea level in the Mandi district. This square-shaped lake holds significance for Hindus, Sikhs, and Buddhists. The lake remains calm in all seasons and accessible throughout the year. This lake is associated with the Guru Padmasambhava and it is believed the king ordered him to burn here while he transformed the pyre into a lake with his supernatural powers. In the middle of the fire, a huge lotus flower bloomed on which Guru Padmasambhava was sitting. The lake is encompassed by four monasteries where a large number of Buddhists visit from all over the world.

Perched at an elevation of 2,730 m above sea level, Parashar Lake is surrounded by snow-capped Kinnaur mountains. There is a temple located on the bank of the lake, which is dedicated to Parashar Rishi. It is believed that the sage meditated on the bank of the lake which this lake is named after him. Parashar Lake is one of the best places in Himachal Pradesh for families and kids. The camping facilities are also available there and tourists can enjoy stargazing. The three-storied pagoda dates back to the thirteenth sanctuary. Parashar Lake is a round-shaped lake that overlooks the Beas River and comprises a floating island.

Location - 17 km from Manali
A high-altitude glacier lake nestled at an altitude of 4,300 m above sea level, Bhrigu Lake is commonly known as the 'pool of gods'. Flanked by snow-capped mountains from all sides, Bhrigu Lake can be reached by trek. This glistening lake remains accessible from May to October, and afterward, it freezes in extreme winters. As per the legends, Rishi Bhrigu meditated at this site. This sacred lake is situated 6 km from Gulaba Village and 8 km southwest of Rohtang Pass. Tourists can enjoy the panoramic view of the mighty Himalayas while trekking and soak in the serene aura of this enchanting place.

Location - 35 km from Dalhousie and 36 km from Chamba

Chamera Lake is an exquisite reservoir that forms from Chamera Dam and is known for its scintillating beauty. This lake has no aquatic life, making it a perfect place for watersports. This is one of the largest lakes in Himachal Pradesh and is surrounded by pine forests. Chamera Lake is a popular tourist destination of Himachal Pradesh and is situated in the vicinity of Chamba, Khajjiar, and Dalhousie. This spectacular lake is an amazing place to rejuvenate amidst nature and tourists can also enjoy boating here with their loved ones.

Snuggled at an elevation of 4,930 m above sea level, Suraj Tal is the third highest lake in India and 21st highest lake in the world. This alpine lake is located close to Baralacha La Pass and on the meeting point of Lahaul Valley, Spiti Valley, and Zanskar Valley. The summer season is the best time to visit Suraj Tal, from May to October, when the region experiences comfortable weather. In the winter season, the lake remains inaccessible due to heavy snowfall. This pristine lake is a revered place among Hindus as its name suggests, it is also known as the 'Lake of Sun God'. Pilgrims visit here in a large number to take a holy dip. This emerald green mystical lake is fed by the glacier and forms the Chandrabhaga River after Tandi in Himachal Pradesh, which later enters Jammu and Kashmir and forms the Chenab River.

This secluded lake is blessed with pristine natural beauty and is perched at an altitude of 3,662 m above sea level. Bounded by 4 Tibetan temples, Nako Lake is nestled amidst gigantic mountains and popular willow trees. Also, there are few caves near the lake where Guru Padmasambhava enlightened his disciples about Buddhism. Tourists can see the stunning reflection of the mighty peaks in the lake. This soothing place is an offbeat destination in Himachal Pradesh and is perfect for relaxing amidst tranquility. The secluded place lies near the India-Tibet border owing to which it requires an inner permit to visit there for Indian and foreign tourists.

Dhankar Lake is located in the lap of the snow-clad peaks near Dhankar Monastery, boasts of jaw-dropping beauty, scenic vistas, and mesmerizing landscapes. Perched at an elevation of 4,270 m above sea level, Dhankar Lake is also known by the name of Sarkund. Many stories and myths are associated with the establishment of the lake. According to one such story, Lord Shiva waited here for Lord Vishnu and his attendant Nandi drank water from here and then Lord Shiva blessed this area with this lake. Tourists can trek to the lake from the monastery, which is a treat for the eyes and the lake is easily accessible in the summers.

Location - 44 km from Dharamshala and 48 km from Mcleodganj

Situated on the south of the Dhauladhar and 9 km by trek in the northwest direction of Dharamshala, Kareri Lake is a high-altitude shallow and freshwater lake. Encompassed by the subtropical forest of pine and chilgoza trees, Kareri Lake is also known as Kumarwah Lake. This enchanting lake is fed by snow and is situated at an altitude of 2,934 m above sea level. After crossing the rocky and alpine grasslands, trekkers can reach the lake. Kareri Lake remains frozen from December to April. This lake also serves as the base for numerous treks into the Dhauladhar range, including Minkiani Pass and Baleni Pass. There is a temple situated near the lake dedicated to Lord Shiva, which is among the must-visit places here.

Surrounded by thick vegetation of the alpine forest, Serolsar Lake is nestled at an altitude of 3,200 m above sea level in the Seraj Valley of the Kullu district. This pristine lake settled amid dense forest around Jalori Pass. This is among the most beautiful lakes in Himachal Pradesh and an ideal tourist destination for peace lovers. The trek for the lake starts from Jalori Pass and Shoja. Travelers can choose to embark on the hike from any of the locations. This round-shaped lake comprises crystal clear water and a small temple dedicated to Budhi Nagin situated around the lake. It is believed that this lake is very deep and Budhi Nagin, the goddess of snakes, lives in a palace at the bottom of the lake.

Amidst the gigantic mountains, the Himalayas located a placid lake, which is known for its pristine beauty, Manimahesh Lake. This lake holds a spiritual and sacred significance for Hindus. Encompassed by the Pir Panjal range, Manimahesh Lake is nestled at an elevation of 4,080 m above sea level. Manimahesh Peak is believed to be an abode of Lord Shiva. This magnificent lake is considered second in significance after Mansarovar Lake in Tibet. To reach the lake, pilgrims have to trek for 13 km. Devotees and tourists can visit the lake in April and May as well as from September to November. Soak in the pious aura of this sacred destination. From August to September, Manimahesh Yatra is in full swing, and a large number of pilgrims visit the lake to delight in the tranquility of this serene place.

Location - 26 km from Chintpurni and 73 km from Kangra

Also known as Pong Lake, Maharana Pratap Sagar is built due to the construction of Maharana Pratap Sagar Dam on Beas River. This man-made reservoir was established in 1960. The scenic beauty of the lake attracts a large number of tourists throughout the year. There are numerous activities in which travelers can partake, including paddling, boating, bird watching, canoeing, sailing, water skiing, swimming, and fishing. Maharana Pratap Sagar is a famous lake of Himachal and among the best places to visit in Himachal with kids. Families tend to visit here for a picnic and relish the captivating beauty of this place. The serene environs and lush greenery make the trip memorable.

Location - 15 km from Sirmaur and 38 km from Nahan

Dedicated to Renukaji, the mother of Parshuram Ji who was one of the tenth avatars of Lord Vishnu, Renuka Lake is famous for its untouched beauty. This lake is flanked by lush green hills and enjoys salubrious weather throughout the year. Renuka Lake holds cultural and historical significance due to which this place is flocked by pilgrims all year round. Tourists can indulge in boating, however, to maintain the sanctity of the lake, no one is allowed to wear footwear during boating. There is a quaint temple dedicated to Renukaji situated on the bank of the lake. Travelers can relax and rejuvenate in the lap of nature while catching a glimpse of the breathtaking beauty of the surroundings. 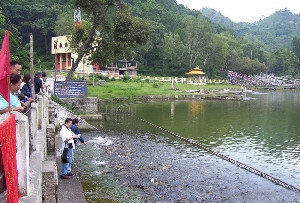 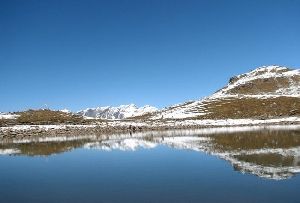 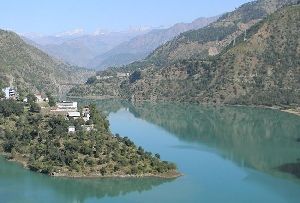 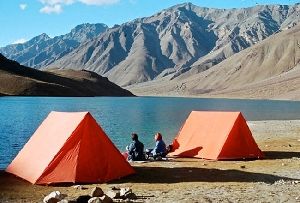 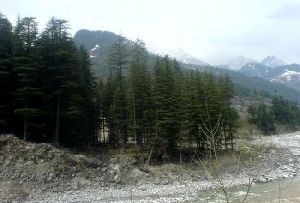 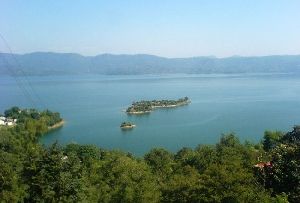 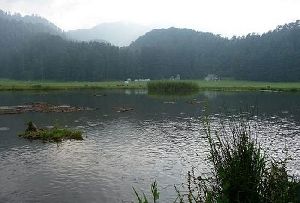 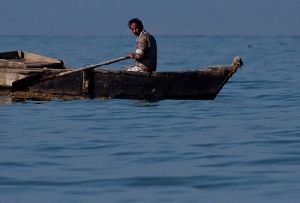 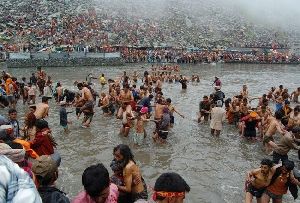 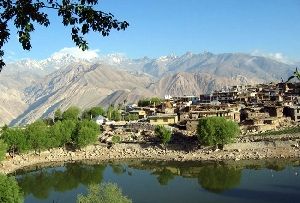 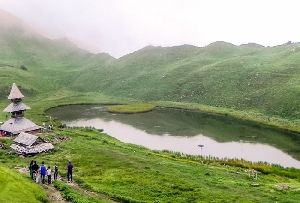 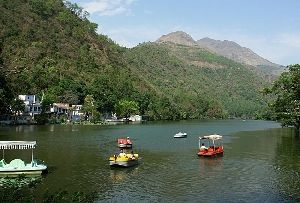 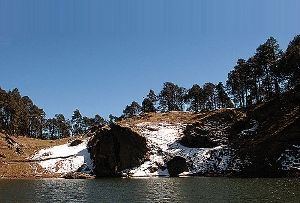 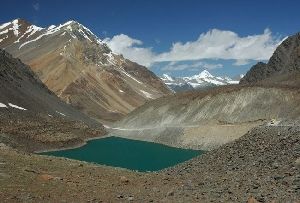