Indore, located on the Western region of Madhya Pradesh is one of the most important commercial centers of the state. The chronological history of Indore is worth considering. It was also an important trading center during the Golden Era of the Holkar dynasty. As the story goes, Malharro Holkar of the Holkar clan, received Indore as part of his booty in the conquest of Malwa in 1733. His descendants, who formed the core part of Maratha confederacy, continued the conflict with the Peshwas and Scindhias and continued the gory battle. A major portion of Indore went under the British Rule when the Holkars lost to the East India Company in the Anglo Maratha War. There are a lot of Tourist Attractions in Indore that bears testimony to the rich cultural heritage of the Holkars. the Holy Places in Indore are a must visit in your Tour to Indore.

The Bada Ganpati Temple, Indore is one of the important attractions if you are considering Holy Places in Indore. The 8 meter high Ganesh idol is probably the biggest Ganesh idol in the world. The temple was constructed in 1875. The Kaanch Mandir, Indore, as the name suggests is made up of multi hued glass. The temple is dedicated to the Jain Tirthankaras and built in the early 20th century. The intricate mirror work that abounds in the temple leaves one dumbfounded by its exquisite handiwork.

The Holy Places in Indore, whether it be a Hindu temple or a church or a Jain temple, reflects the spirit of oneness in the people of Indore. It is the hotbed of all culture and races that stay in perfect harmony with one another. 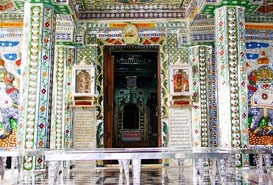