History of the Chhatris:

In the ancient times, the Holkar Dynasty ruled over a large area of Madhya Pradesh. They were good rulers and gained tremendous support and prestige from the people and also had their support.

But the British established their supremacy in India, during the year 1858, when the East India Company transferred all its powers to the Queen, who became the formal queen of India too.

So, the Holkars, after being defeated by the British in a battle had to submit their kingdom to them, and so, a large part of their kingdom was lost. It was a fact that they also lost their capital.

In order to make up for the loss they have to select a profitable place. So, Indore became the name of that place. Indore derives its name from the two renowned temples namely Indreshwar and Indrapur.

Description of the Chhatris:

How to Reach Chhatris in Indore:

You can take bus or car which would take you to the Chhatris, after you came to Indore by Train or Plane. It is worthwhile mentioning that Indore has a domestic Airline. 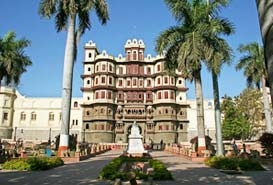