A must-visit destination in Rajasthan, Jaisalmer is the epitome of culture as well as the heritage of the state. Contrary to the majestic towers that the city boasts of in defining the true legacy of Jaisalmer, the museums are the new tourist hubs. Museums in Jaisalmer are best suited to absorb the history and culture of the state to the very core. Moreover, these renowned museums turned tourist attractions boast a plethora of stunning antiques, which art lovers find amazing.

The most impressive noble haveli (mansion) in Jaisalmer has been converted into a private museum that displays the way of life of the Patwa family, who were prosperous Jain brocade merchants. The home and the other four in the group were all constructed by the same family in the early 19th century. It took more than 50 years to finish, and look at the architecture. The astonishingly delicate ornamental lattice carvings adorn the haveli's tall, elaborate facade. Beautiful glass inlay work and murals cover the interior's walls.

The former royal home is now a museum featuring various artifacts illustrating the city's history inside the Jaisalmer fort. It has a more straightforward structure than the magnificent Havelis of Jaisalmer. You can roam through the chambers where guests are entertained and the king and queen's separate quarters, even though not all of the palace is accessible to the general public. The king's bedroom is one of the luxuriously appointed chambers.

The 450-year-old mansion that now serves as the museum's location was once owned by Hindu priests who counseled the king. The mansion was recently renovated and refurbished by descendants, who then furnished it with a carefully chosen assortment of items that covered every element of life in the fort, from cooking to clothes. There is also a beautifully preserved tiny temple on the grounds, and each room has a unique narrative to tell.

This tiny museum was established in 2006 by renowned local historian, folklorist, and author Laxmi Narayan Khatri to house his collection of artifacts related to the history and way of life of the Jaisalmer Desert. It consists of ancient marine fossils, weaponry, texts describing trade deals between local merchants and visitors from Asia, coins, paintings, utensils, instruments, clothing, details about traditions like the use of opium, and information about birth, marriage, and funeral ceremonies.

Another small but intriguing museum, this one, results from a single man's lifelong work to record and save the area's desert culture. Dr. Nand Kishore Sharma, a former local history instructor, founded it in 1997. The main draw is the puppet performance in the evening. But the museum also contains the founder's collection of vintage Rajasthani musical instruments, turbans, textiles, and photographs. Additionally, there is a gift shop where visitors can buy the founder's books about the social norms of nearby desert settlements. An antique mixing box used to make opium is fascinating.

If you are planning to visit these beautiful museums, then you must check out our Jaisalmer tour packages. 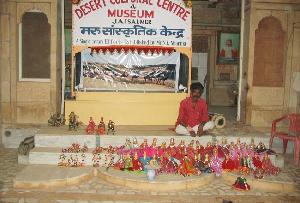 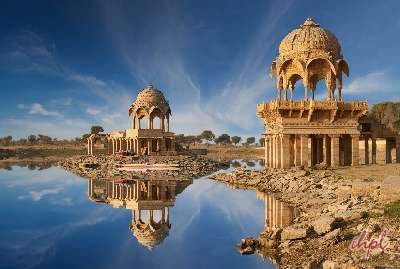