Perhaps, one of the lesser known tourist destinations in Gujarat, a Tour To Jamnagar is, however, one of the best ways of knowing more about the rich culture and heritage of Gujarat as well as India. One of the finest relics of the rich regality that characterized most parts of India before her gain of independence, a visit to Jamnagar promises a trip of a life time. Providing, the tourists to the land with a number of important sights as well as several of the important tourist attractions of Jamnagar.

History of the Bohra Hajira, Jamnagar

Built in the year 1540, by Jam Rawal, who belonged to one of the most respected Royal dynasties of Gujarat, the history of Jamnagar can be said to be one of the richest histories in the entirety of the province of Gujarat. It is after Jam Rawal, that the city of Jamnagar was renamed to its present name. The previous name for the city was Nawagarh, a name which can be literally translated to mean New City. The Bohra Hajira in Jamnagar in Gujarat in India is one such monument, which can add pleasure to your visit to Jamnagar.

Description of the Bohra Hajira, Jamnagar

One of the most important tourist attractions of Jamnagar, a visit to the Bohra Hajira in Jamnagar is a definite must include if you are planning a tour itinerary to Jamnagar. One of the most impressive monuments in Jamnagar, the Bohra Hajira in Jamnagar greets you the moment you step into the city of Jamnagar. The monument is clearly visible the moment you step in to the premises of the city of Jamnagar via the Rajkot Highway. However, one must keep in mind that it is necessary to obtain prior permission to visit the building if you are planning to explore the building closely.

The Bohra Hajira in Jamnagar is also the site for the celebrations which are associated with the festival which takes place during the auspicious month of Sravana, according to the Hindu calendar. At the time of its construction, the Bohra Hajira in Jamnagar was accessible by boasts and other forms of communication by water as the region is well connected to the various lakes and rivers of Jamnagar, including the Rangmati as well as the Nagmati Rivers. 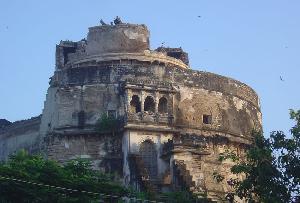