The city of Jamnagar, in Gujarat is known to have a few of the uncommon Temples in India. Hence, every year tourists from all over the world flock the city in large numbers to have a look at the finest gifts of history. Among these are visited by the tourists form various parts of India and the world. Among the Temples in Jamnagar, the Bhid Bhanjan Temple, Jamnagar deserves a special mention.

The Holy Places in Jamnagar is the major Tourist Attractions in Jamnagar. The extensive history of the place is the reason for the presence of such significant structures.

Historically, Jamnagar was a city as well as a district belonging to the State of Gujarat. Jamnagar district was known as 'Nawanagar' (meaning the new city), which was one of the most chief princely states of Saurashtra.

Jamnagar was founded by Jam Rawal in 1540 A.D. It was he who was one of the 'Jams' (hereditary title of the rulers in those times). It was from this that the city of Jamnagar (city if the Jams) found its name.

The Bhid Bhanjan Temple is one of the many Temples in Jamnagar whose beauty and minute detailing in decoration has fascinated those who have already visited it.

For those who haven't, reaching Jamnagar is also not a problem at all. The place can be reached by various modes of transport. Flights of Indian (Indian Airlines) can take you to Jamnagar from Mumbai in Maharashtra or Bhuj in Gujarat. Jamnagar is also connected directly with Ahmedabad and Bombay through railway. Hapa Junction, which is 9 kilometers from Jamnagar, is a convenient point to drop at. Moreover, Jamnagar is also connected by a sound network of Roads. State Transport of Gujarat offers efficient two-way bus services from Jamnagar to the cities of Gujarat like: 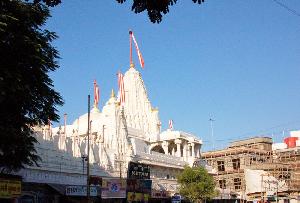 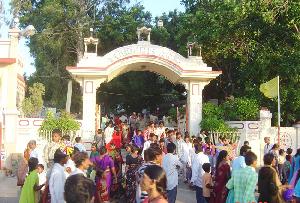