Jeypore is the commercial nerve center of Koraput district and is well endowed with falls and forests and thronged with colorful wildlife that attracts thousands of tourists to the place every year. The Holy places in Jeypore are also oft frequented by tourists and locals. The Papadahandi Jeypore is a major pilgrimage centre.

The Papadahandi In Jeypore In India has a temple dedicated to Lord Shiva, who is the most widely worshipped deity in these regions. Papadahandi In Jeypore in Orissa is a lovely place apart from being a major pilgrimage centre. The temple is nestled in serene locales and the campus of the temple is populated with champak trees. The champak flower blooms in summer and saturates the place with its sweet fragrance incorporating a calming charm over the place.

Papadahandi Jeypore is 58 km from Jeypore town proper and can be reached by public or private transport. You can take an auto rickshaw or a bus to reach Papadahandi in Jeypore. The temple is flocked with local pilgrims during shivaratri festival.

Jeypore in Orissa has all such facilities to serve as the convenient base for visiting the places of interest in and around. Duduma is a charming waterfall on the river Machhakund, 70-km from Jeypore. It is also a place of pilgrimage with rare scenic beauty. The other places of tourist interest in Jeypore are also blessed with rare abundance of flora and fauna.

The Gupteswar Jeypore and Minna Jhola are the other major pilgrimages you can visit on a tour to Jeypore. Jeypore is well connected to other cities in Orissa and also Visakhapatnam. 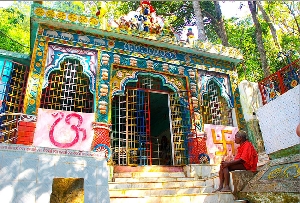