There are a few rare places in India where the power of Shakti is worshipped and the Kamakshi Amman Temple in Kancheepuram is one of them. This temple at Kancheepuram is an ancient temple and is associated with the Aadi Sankaracharya. On Tuesdays, Fridays and Sundays, there are a large number of devotes who flock here to worship. The main festivals of the Kamakshi Amman temple are Brahmotsavam in February and Navaratri in November.

According to the legend, Kamakshi had offered worship to a Shivalingam which was made out of sand, under the mango tree. It was then that she gained Shiva’s hand in marriage. Legend says that Kamakshi was originally an Ugra Swaroopini. It is only after Adi Sankaracharya established the Sri Chakra that she was personified as the Shanta Swaroopini.

It was Sri Shankaracharya of ‘Kamakodi peedam’ who established his seat in the temple of Kamakshi Amman Temple. There is the Sri Chakra enshrined in front of the deity at the Kamakshi Amman Temple, Kancheepuram .The corridor at the temple is also adorned with a number of other deities. The temple stretches for an area of about 5 acres. The Kamakshi has been kept enshrined in a seated stance in the sanctum, which is crowned with gold plated vimanam.

There is a hall with hundred pillars among the ,many halls or mandapans present at the Kamakshi Amman Temple .There is a temple tank which is located in the outer parakram. Past the four pillared hall and the inner parakram, through a flight of stairs, one reaches the sanctum surrounding which are the smaller shrines. These shrines belong to Ardhanareeswarar, Soundaryalakshmi, Kallar and Varaahi. 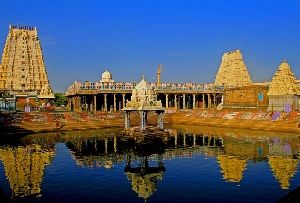 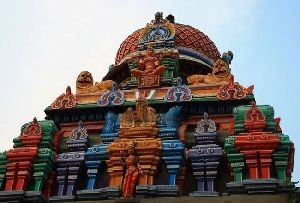 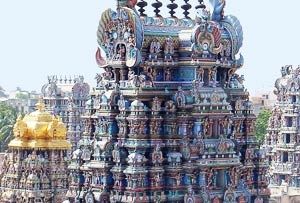