The picturesque and historical city of Kanker is a municipality in the Kanker District in Chhattisgarh. The Kanker District is located in the southern region of Chhattisgarh. Kanker District was a part of old Bastar district in the old times. It was in the year 1999 that Kanker received its identity as an independent district. Kanker is the mecca for people who have a religious bent of mind. There are numerous temples and other Holy Places in Kanker. The economy of the district is mainly based and dependent on agriculture. Rice is the main crop of the area. The other important crops in the area are Kodo, wheat, chana, Tilli, bhutta, Moong and sugar cane. Five rivers flow through the district, that include Sindur River, Mahanadi River, Turu River, Doodh River and Hatkul River. The district is mainly composed of small pockets of hills.

There are quite a large number of monuments, mountains, waterfalls, historical places and Holy Places in Kanker. Every year thousands of tourists from each and every corner of the world and from all over India visit these holy places in Kanker.

The Charre-Marre Water fall, Gadiya Mountain, Tank on mountain, Malanjhkudum Water fall and Shivani Maa Temple are some of the popular Holy Places in Kanker, India and other tourist attraction spots. 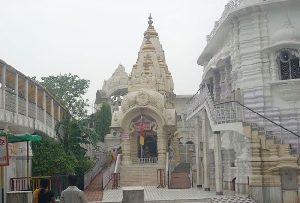