The mind blowing sceneries, monuments and the many tourist attraction spots in Kanpur are a treat for the eyes and definitely a lifetime experience for the visitors. Every year thousands of tourists come and visit the city of Kanpur. Kanpur is situated on the banks of the sacred river Ganga. There are an innumerable number of historical, religious and holy places in the commercial city of Kanpur.

The All Souls' Memorial Church in Kanpur in India was built in the year 1875. This was built in honor of the Britishers who had lost their lives in the war of 1857. The beautiful Church was built by the great architect of the east Bengal Railway, Walter Granville.

Handsomely executed in bright red brick with polychrome dressings, All Souls' Memorial Church, Uttar Pradesh follows the Lombardic gothic style. The interior of the church contains monuments of the mutiny as well as several memorial tablets.

To the east of All Souls' Memorial Church, Kanpur is the Memorial Garden which can be approached through two gateways. This lies in a separate enclosure. Here stands the handsome and beautiful carved gothic screen which was designed by Henry Yule. Built by Baron Carlo Marochetti, the center of the garden is occupied by the beautiful carved figure of an angel with crossed arms and holding palons showing the symbol of peace. In the beginning the statue and the screen stood in the Municipal Gardens in the center of the city, over the site of the Bibighar well. After independence, in the year 1948, these memorials were relocated here.

There are a number of interesting graves from the late 19th century in the Military Cemetery on the edge of the cantonment. 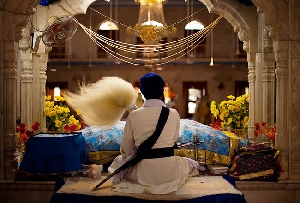