Based in the Bastar region of Madhya Pradesh, a part of which now falls under the State of Chhattisgarh, the Gond Tribe is the largest among all tribal community in India. The Tribal Culture in Kawardha is essentially centered on the Gond Tribe in Kawardha.

The name 'Gond' is a derivation of 'Konda' which is a Telugu word meaning hill. The central part of Madhya Pradesh and the southern part of Chhattisgarh are the two areas, where the concentration of the Gond Tribe is maximum. The Gonds of Kawardha or rather the Bastar can be further classified into three sub-castes namely, the Maria, Muria, and Dorla.

The closed social structure of the Gond Tribe, Kawardha can be easily interpreted from the fact that the marriages within the same family are a common feature in Gonds of Kawardha. Widow marriages and re-marriages are also approved by the society.

Although dowry system is a familiar feature of the backward classes, the Gond Tribe also shows respect for women by allowing their fathers to be paid by the groom in order to acquire his bride.

These, along with other features make the Tour to Chhattisgarh an educative experience. Thus witnessing the Gond Tribe is one of the key Tourist Attractions in Kawardha. 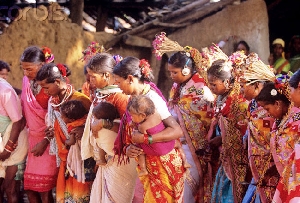