Brahma and Hanuman Temple in khajuraho

The Brahma and Hanuman Temple in Khajuraho, India is a Hindu Temple that in the beginning was dedicated to Lord Vishnu. According to an early inscription in the Hanuman Temple on a 2.5 metre statue, the Temple was constructed round about 922 A.D. during the rule of Maharaja Harsh. A similar time of construction can also be assumed in case of the Brahma Temple.

The Temple of Brahma and Hanuman in Khajuraho is primarily made of granite and sandstone. The Brahma Temple is situated on the banks of the Khajur Sagar, another name for which is Ninora Tal. While granite is the sole ingredient in the body of the structure, its peak or Shikhara is made of sandstone.

The four-faced image of Brahma inside the Brahma Temple is marvelous. The image of Lord Vishnu is carved in the beam in the doorway of the sanctum. The 8 feet high statue of Lord Hanuman in Hanuman Temple is in a derelict condition presently.

The Brahma and Hanuman Temple in Khajuraho, Madhya Pradesh can be conveniently reached from various parts of the State as well as the country. The cities of Jhansi, Gwalior, Agra, Jabalpur, Indore, Bhopal, Varanasi, Allahabad, Mahoba, Harpalpur, Satna and Panna provide direct bus services to the city.

While the railheads of Mahoba and Harpalpur are the nearest from Khajuraho, the station at Satna is connected with the important cities of Delhi, Mumbai, Chennai, and Varanasi.

In addition to this, there are frequent direct flights from Delhi, Agra, Varanasi, and Kathmandu that land at the Airport of Khajuraho. 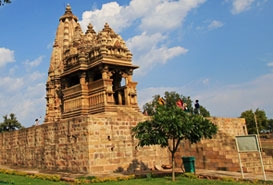 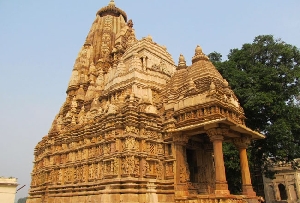