The outer wall of the Lakshmana stone Temple in Khajuraho is delicately carved. In front of the temple are two open pavilions which are called mandapas. On the South is the Varaha mandapa with an image of the standing Varaha, which is the boar incarnation of Vishnu. The entire body of the statue is carved with the figures of many other Hindu gods and goddesses.

The temple stands on a platform which has sculptures depicting elephants and horsemen in procession. On climbing the stairs of the temples one reaches to the broad platform of where rituals are performed. The Lakshmana Temple at Khajuraho faces east and a flight of stairs leads to the inner chamber which is placed on a platform. The Lakshmana Temple has all the characteristics of a north Indian temple where there is a porch at the entrance, a hall of pillars and sculptural motifs on the walls. The pradkshina path is around the main chamber and is decorated with sculpture all over it. The statue of the Vaikuntha Vishnu bears three heads which represents the various incarnations. 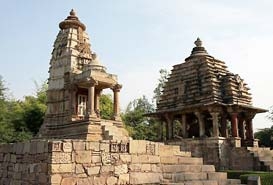 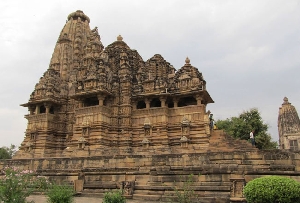 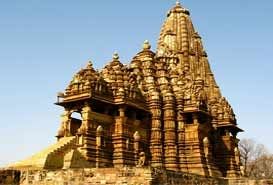