Whenever you think of Rajasthan the first thing that strikes your mind is about the desert and about the various ancient havelis, forts, monuments etc, which are famous places of tourist attractions and are always crowded with tourists both international and domestic. Kota is well known to tourists as one of the ancient cities which have beautiful gardens, lakes, palaces etc. Kesar Bagh in Kota is one of the well known gardens and one of the famous tourist attractions in Kota. The various lakes and gardens are unique in their own way and can be easily distinguished from one another.

Kesar Bagh is preferred by all those who wish to know about the Royal Past and about the history of Kota. During your visit to Kesar Bagh, you can have a look at more than 65 cenotaphs which belonged to the Bundi rulers and their queens, princes etc and of the brave soldiers who gave their life in order to protect their city.

Kesar Bagh is located in the opposite of the Sagar Lake and it offers some great views to its visitors as most of the cenotaphs are built with white marbles, which provides a magnificent view. Most of the cenotaphs are an architectural marvel and have various motifs of local deities and various other animals like horses, cows etc.

The cenotaphs have typical structures which represents Mughal and Muslim architectural style. It is made up of pillars and the top structure or the pinnacle or chattri has an idol of Shiva Lingam which is pretty common in most of the architectures of the Rajput era.

If you feel tired and hungry during your tour to Kesar Bagh then you can drop in at the small eateries that are there and taste some of the traditional food items. If you wish to enjoy your trip to Kesar Bagh, then it is better to drop in during winter, when you can take a stroll in the entire park as temperatures will be low.

There are certain package tours to Kesar Bagh which you can avail. Some of these package tours also conduct sightseeing tours along with the visit to Kesar Bagh. So if you opt for such tours you can also have a look at various places of tourist attractions in Kota.

Some of the other places of tourist attractions in Kota which you can drop in during your trip to Rajasthan are mentioned below: 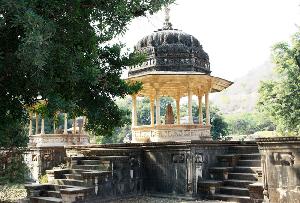